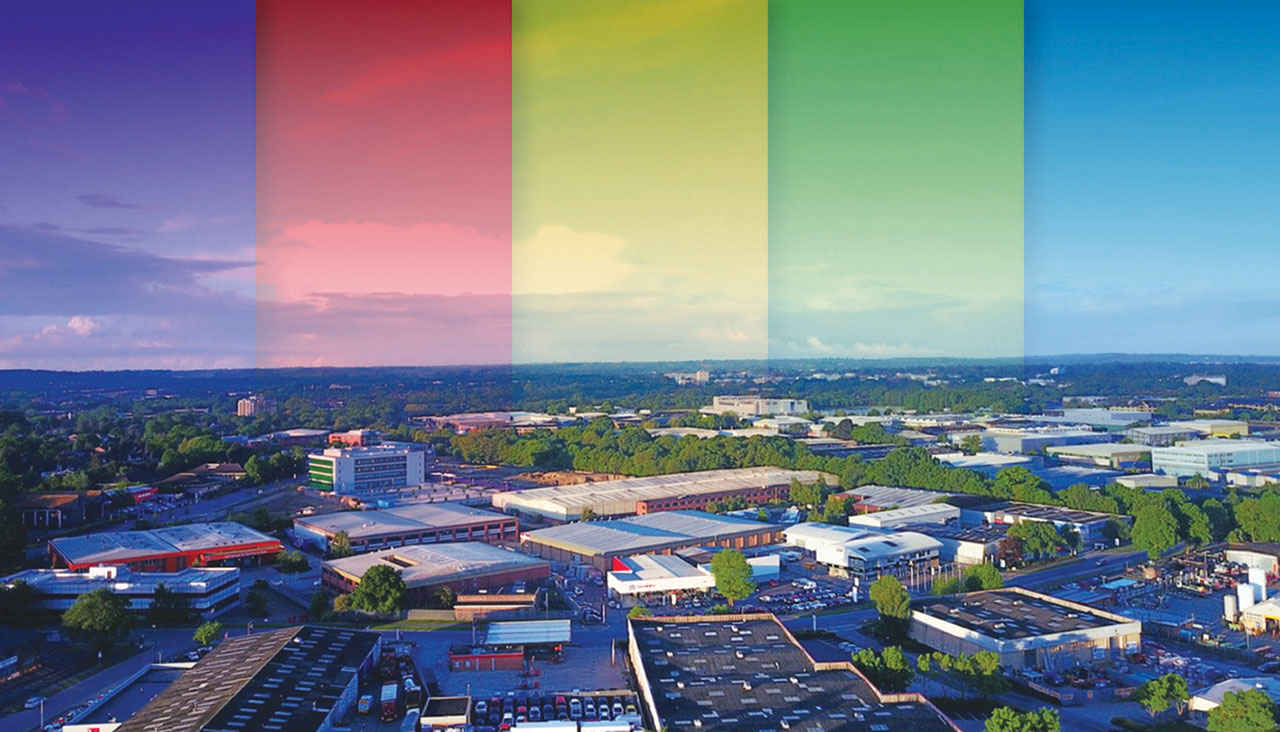 The Manor Royal BID, located in Crawley and adjacent to Gatwick Airport, has published an ambitious Business Plan for a new five-year term that businesses will be asked to vote on next month. The Business Plan sets out the achievements of the BID over its first term as well as bold new plans for the next five years.

The vision is for Manor Royal to be widely regarded as a place where companies and people choose to be for the strength of its business community and the quality of its environment.

“Today the Manor Royal Business District is a very different place to the one we were all working and trading in a few years ago”, says Trevor Williams, Industrial Director of Thales, which employs more than 2,100 people on Manor Royal.

“There are more businesses, fewer vacant buildings and developments underway. We have gone from a place criticised for being out of date where only 13% of businesses said they were satisfied, to one that wins awards and where satisfaction levels regularly register 80% and higher.”

Run by Businesses - For Business Benefit

Trevor believes that the Manor Royal BID, of which he is Chairman, has been the driving force of these changes, bringing together a collective business voice with public sector partners.

“It is the only organisation whose sole interest is the success of Manor Royal” he says. “Most importantly, the BID is run by and for Manor Royal companies. This has enabled investment to improve Manor Royal’s broadband infrastructure, roads and security, as well as the delivery of subsidised transport and training initiatives for employees.”

The BID team and its partners have also worked hard to create a greater sense of place and community for those working on Manor Royal. This has included the creation of local business development and networking opportunities as well as the delivery of an effective marketing and communications programme to keep everyone informed about what’s going on in the area.

Trevor’s concern is that all these improvements and services will be lost if the BID is not renewed.

If the majority of businesses vote ‘yes’, the Manor Royal BID will continue until 2023 and be able to deliver its ambitious plans. However, if the majority of businesses vote ‘no’, the BID will stop, as will the additional services it provides such as the Manor Royal Rangers and Maintenance Teams and Winter Gritting Services. Other improvements it has made, for which it is responsible, will be restored to their previous state including the signs, parks, and entranceways.

Jack Bedell-Pearce, Managing Director of 4D Data Centres Ltd, which established a new base on Manor Royal in 2017, believes that the Manor Royal BID brings a degree of cohesiveness and common cause for those located there. He says: “Just being able to talk to other local businesses about issues that are affecting them would be reason enough to renew Manor Royal BID but the infrastructure projects (from the signage to improved broadband) make it even more invaluable. I’ll certainly be voting ‘yes’ to renew the BID for another term.”

Stephanie George, Centre Manager at the popular Basepoint Centre on Manor Royal agrees. “I’m voting ‘yes’ for the renewal of the BID because we can now positively influence changes in our local area. Improvements to the roads, lighting on the cycle paths and new signage have made it easier for our team and our tenants to access our business centre safely and comfortably.

“Being able to give our tenants access to discounted training courses, networking events and other avenues of business support is exceptionally valuable and would be sorely missed if they were no longer available. Manor Royal has improved greatly since the introduction of the BID,” she added.

The new BID Business Plan has been developed after extensive research and consultation, and the BID team has been working hard to ensure all those eligible to vote have registered their details with the local authority and are aware of the renewal process.

The levy rate - the contribution businesses would be expected to make annually for five years – will remain at 1% of the rateable value of the property occupied for those properties with a rateable value of £12,000 or more, but capped so that no single property would be liable for more than £3,500 per annum. If businesses vote to renew the BID, this will generate a fund of circa £2.6m over a five-year period to be reinvested across the business district, along with any additional funds the BID team secures from other parties.

The Manor Royal BID adheres to the principle of “additionality” which means that what it delivers is in addition to what Crawley Borough Council or West Sussex County Council currently deliver.

“This is a crucial time for the Manor Royal BID,” concludes Keith Pordum, Managing

Director of Bon Appetit and Vice-Chair of the BID. “Such a lot has been achieved over the first term that would not have happened without the BID. The plans for the next five years are even more exciting, so I would urge all those eligible to vote in favour of a new BID term.”

Promote Manor Royal Business District to secure investment and retain businesses, promote local companies and represent the interests of the business district at a strategic level with private and public-sector partners.

Objective 2: Trade and Save

Provide opportunities for companies to trade with each other and benefit from subsidised or free services.

Ensure the infrastructure and facilities on offer meet expectations associated with a premier business destination so that businesses can function, staff are satisfied, and visitors are impressed.

Deliver enhanced levels of maintenance, public realm and security throughout the business district.

Details of the projects associated with each objective are set out in the relevant section of the Business Plan along with details of how the Manor Royal BID will be managed and run.

WHAT IS A BID?

A Business Improvement District (BID) is a precisely defined geographical area where the businesses vote to invest collectively in local improvements to enhance their trading environment. The businesses decide what they want the BID to do, they vote to create it and they run it by the rules they agree.

Ciaran Gunne-Jones of Lichfields UK, a leading UK planning and development consultancy, has undertaken a new Economic Impact Study for Manor Royal Business District which has concluded that Manor Royal is the “powerhouse of the Gatwick Diamond”. His research has shown that floorspace on Manor Royal has grown by 18% since 2010, and the number of companies located there has also grown by more than 5%.