READ NEXT
Gatwick Diamond Business is 65! 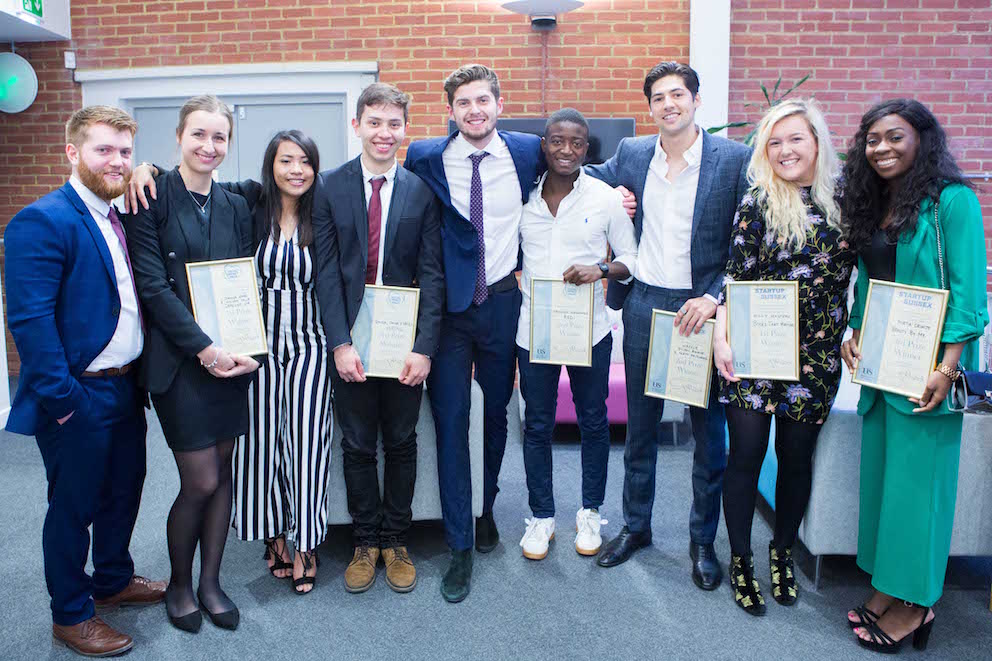 The founder of a subscription box service with a mission to empower and inspire women received a prize worth £10,000 to help develop her business at last night’s StartUp Sussex awards.

The annual enterprise programme, delivered by Sussex Innovation for students and recent graduates from the University of Sussex, reached its climax with the announcement of several prize winners. The 2017-18 competition was the biggest ever, with more entrants, finalists and winners than ever before.

The 2018 StartUp Sussex winner is final year undergraduate student Molly Masters. Her business, Books That Matter, was inspired by reading for her English Literature degree. The book club and subscription box service is designed to empower women and girls through literature, delivering and debating great works of fiction every month.

A Social Impact Prize of £10,000 was also awarded to the enterprise with the most potential to bring about positive social change. The winners were Joanna Kmiec, an MA student reading for a Project Management degree, and co-founder William Halle. William is diabetic, and designed their product, Deadline.Live, as a safety net for people living alone with serious illnesses. It combines an app and a Bluetooth bracelet and acts as a ‘dead man’s switch’, alerting friends and family when the owner doesn’t check in regularly.

As well as earning the title of Sussex Student Entrepreneurs of the Year, the winners received a £10,000 prize consisting of a cash award and ongoing membership, consultancy and marketing from Sussex Innovation.

“I’m thrilled, it’s completely overwhelming,” said Molly Masters, founder of Books that Matter. “I was completely shocked when my name was read out, because of the calibre of the other finalists. Winning the prize means that I’ll be ready to launch Books that Matter in September, which feels amazing!”

“We’re very excited, it’s a dream come true for us to start making our idea a reality” said Joanna Kmiec and William Halle, founders of Deadline.Live. “It feels unreal – the next step for us is to launch a crowdfunding campaign to build our wearable, so we can’t wait to start using our marketing support from Sussex Innovation.”

The winners were revealed at an awards ceremony held at the Sussex Innovation Centre and attended by members of the local business community, University staff and students, and the Mayor of Brighton and Hove. They emerged victorious from an initial pool of more than 80 students, who began the programme all the way back in October.

The 10 finalists each presented their business plans in a pitch earlier this week to the StartUp Sussex judges, a ‘Dragons’ Den’-style panel consisting of local investors, entrepreneurs and representatives from the University. The panel were extremely impressed with the high standard of all the presentations.

“As always, the panel saw a great selection of finalists,” said Mike Herd, Executive Director of Sussex Innovation and a member of the StartUp Sussex judging panel. “Books That Matter is a particularly fitting winner in a year where we’ve tried to do more to support female entrepreneurs – we were pleased to see so many women presenting their ideas in this year’s finals. Ultimately, Molly won because she has clearly identified and already successfully engaged her target market. Her pitch on the day really blew the judges away.”

“The standard was extremely impressive and gave us a real challenge as judges,” said Peter Lane, Innovation Support Manager at Sussex Innovation and a member of the Social Impact Prize judging panel. “Deadline.Live stood out for us with a professional brand image, a working prototype, and an innovative solution that could deliver real social value to diabetic care. William and Joanna had direct experience of the problem, knew their market well, and demonstrated real ambition to take their app and next stage wearable product to market.”

“We were particularly impressed with the presentation skills of all this year’s finalists, as well as the professionalism of their financial plans – it’s testament to our experienced support team who deliver the programme and mentor the finalists through the process. We urge the other finalists to carry on developing their ideas and work with us in the future – they’re all capable of being successful enterprises.”

As well as one-to-one mentoring with the Sussex Innovation support team, the finalists were advised by previous winners Chris O’Hare, Nick Musto and Darren Tenkorang, received presentation skills coaching from improv troupe The Maydays, a social enterprise workshop from The Platform, and financial guidance from Santander Universities.

The Social Impact Prize is funded by a generous private donation from a Sussex alumnus, who was so impressed by the quality of the finalists that a second and third prize were also awarded. In a surprise announcement on the night, there were six winners for the first time ever.

In third place, Portia Cronje (4th year Finance and Business) received a £6,000 prize for her enterprise, Beauty By Me. Her product is a web application for self-employed beauticians and small salon owners, helping them to manage bookings and administration.

The remaining finalists were: