One of New York’s most eagerly anticipated developments for investors is Hudson Yards – the largest private property development in America’s history, and an exciting new business district situated southwest of Manhattan. 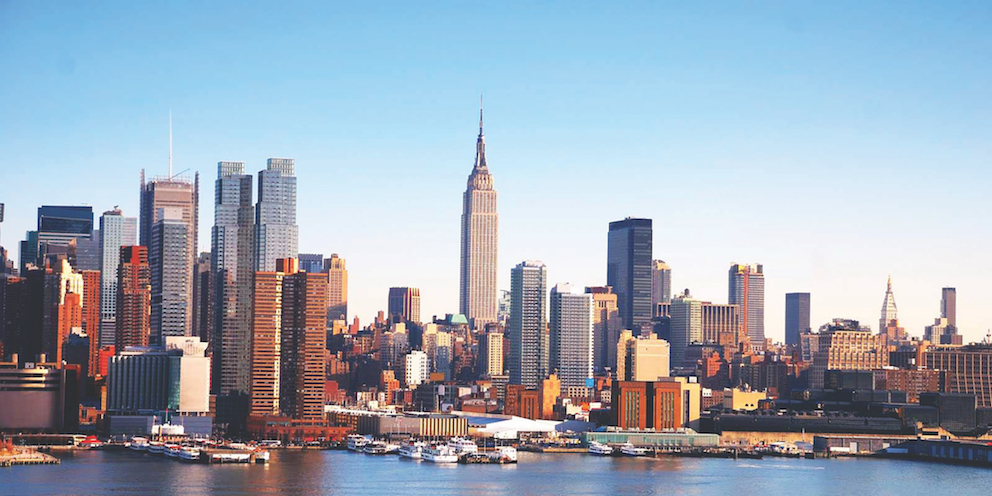 There’s a timelessness to New York that makes it feel like it’s waiting for you. Omnipresent yellow taxis, the rumbling pulse of the subway, ferries trawling across the transformative stretch between Battery Park and Staten Island. The sleepless neon blur of Times Square, the understated majesty of the Manhattan Bridge, the gritty promise of Brooklyn. Few cities on earth have such a distinct personality, or such a compelling working culture that sets the bar globally for what perseverance and vision can achieve.

A magnet for aspirational minds, New York is a surefire hit when it comes to hosting corporate events. Who wouldn’t be tempted to attend a gala dinner in the heart of Central Park at the Loeb Boathouse – an elegant venue situated on the world-famous park’s lake (thecentralparkboathouse.com). Or to mingle at a drinks reception along the High Line, Manhattan’s elevated park set along the former New York Central Railroad – its greenery-filled pathways have hosted everything from film screenings to catwalk shows (thehighline.org). Or to seal a deal beneath the stained-glass dome of The Palm Court at The Plaza – an iconic spot for a breakfast meeting (theplazany.com).

Beyond its old faithfuls, New York has gained, and is gaining, a slew of new infrastructure that will benefit both the local and international business community. These include the World Trade Centre site, where the gleaming 4 World Trade Centre and 1 World Trade Centre towers stand defiantly, welcoming tens of thousands of workers and shoppers each day. And the $4 billion World Trade Centre Transportation Hub, designed by Spanish architect Santiago Calatrava, has been opening in stages since 2016. Known as the Oculus, the structure’s exterior design is modelled on the wings of a dove taking flight (though critics have likened it to pair of ribs). Oculus is now the main terminal for the World Trade Centre site, slated to handle double the current number of 50,000 weekly commuters from New Jersey and beyond. The glass-paned structure sends light down into its subterranean pathways, which connect to rail and subway lines, and the 1,858 sqm transit hall – a transport landmark to rival Grand Central station with its towering white skylight – can be hired for certain kinds of events.

Just around the corner, the 4,000 sqm Liberty Park also opened to the public in 2016. Overlooking Ground Zero, the space is home to a 91-metre-long living wall flourishing with creepers and ivy. And nearing completion imminently is 3 World Trade Centre, which will also be filled with office and retail space, and it will be possible to view four US states from the 76th-floor terrace of the 329-metre skyscraper.

Still in the pipeline for the site are 2 World Trade Centre – another landmark commercial tower – and the Ronald O Perelman Performing Arts Centre, a translucent marble cube-shaped venue that will embrace “creation and memory with respectful individuality”, due for completion in 2020.

Coming in June, Brooklyn’s bohemian neighbourhood of Williamsburg will gain the first iteration of a mammoth new mixed-use development. The Domino Sugar Refinery building is the centrepiece – a 19th-century redbrick factory standing proud along east bank of the East River – and is being repurposed into covetable office space, while doughnut-shaped commercial tower 325 Kent is also on the rise. And the finishing touches are currently being added to its first phase, a 2.4-hectare park that will transform the Brooklyn waterfront area.

Domino Park will have suitably hip attractions for Williamsburgers, such as a dog run, bocce ball courts, a Japanese Pine Garden, a taco restaurant and a fairylit picnic area – plus an elevated walkway propped up by steel columns salvaged from the Raw Sugar Warehouse. In addition, Artifact Walk will run for five blocks, displaying historical objects part of the sugar refining process that have been rescued from the site, including 11-metre-tall syrup tanks, signage, corkscrews and manufacturing equipment. All in all, Domino Park will add a new dimension to Williamsburg for businesspeople and tourists alike.

Finally, one of New York’s most eagerly anticipated developments for investors is Hudson Yards – the largest private property development in America’s history, and an exciting new business district situated southwest of Manhattan. Set to be completed by 2025, the $25 billion 11-hectare site will be a “city within a city” with eight residential buildings, a retail site with shops and five office skyscrapers – one of which will have an observation tower higher than the Empire State Building. While the prime real estate here will probably only be a viable option for millionaires, there are plans to build a spectacular public viewing gallery in Hudson Yards. Designed by Thomas Heatherwick, “Vessel” will be a honeycomb-like warren of staircases and landings – redolent of an Escher artwork – in a move to create something inclusive and welcoming for all New Yorkers.

The sheer scale of New York’s plans is truly staggering. The city’s ability to reimagine itself and deliver on its grand plans shows that the sky really is the limit when you apply a New York state of mind.

“Our services are great for individual business travellers wishing to explore the city, as well as small medium enterprises and large companies who want a detailed customised itinerary based on the group’s specific purposes and needs,” says Leuzinger.

Uhuru Design at 74 Franklin (uhurudesign.com) is a unique workspace located in the desirable Tribeca district, that turns office working into an experience. Its centrepiece is a raw and natural wooden table, plus there’s a built-in bar, a working fireplace and catered lunch.

At Rooftop Reds (rooftopreds.com), the world’s first commercially viable urban rooftop vineyard, enjoy a locally sourced glass of wine right amidst the vines, where groups can sign up for viticulture classes. During the summer, Rooftop Reds also organises weekly movie nights and yoga.

Located on the waterfront, Celestine (celestinebk.com) is an Eastern Mediterranean restaurant with stunning views of the East River, Manhattan and Brooklyn Bridges, and the Manhattan skyline.

Established by Michelin-star chef John Fraser, the food at Nix (nixny.com) is exclusively vegetarian, focusing on seasonal and local produce. This sleek restaurant is ideal for a light, healthy lunch – so delegates won’t feel too stuffed for a busy afternoon.

For a long meeting, this contemporary conference room at Work House NYC (workhousenyc) feels as inviting as it is practical. The space is equipped with all the board meeting essentials: a whiteboard wall, TV with HDMI/Apple TV capability and speakerphone, and natural light pours in from the skylight. The accentuated breakout space and roof deck provides a change of scenery, encouraging ideas to flow freely.

The Whitney Museum of American Art (whitney.org) is a unique space for large networking events and evening celebrations surrounded by beautiful artwork. The roof terraces overlook the vibrant Meatpacking District and are perfect for an evening cocktail at sunset.