How does Warren Buffet do it?

He seems to combine being rich - and popular 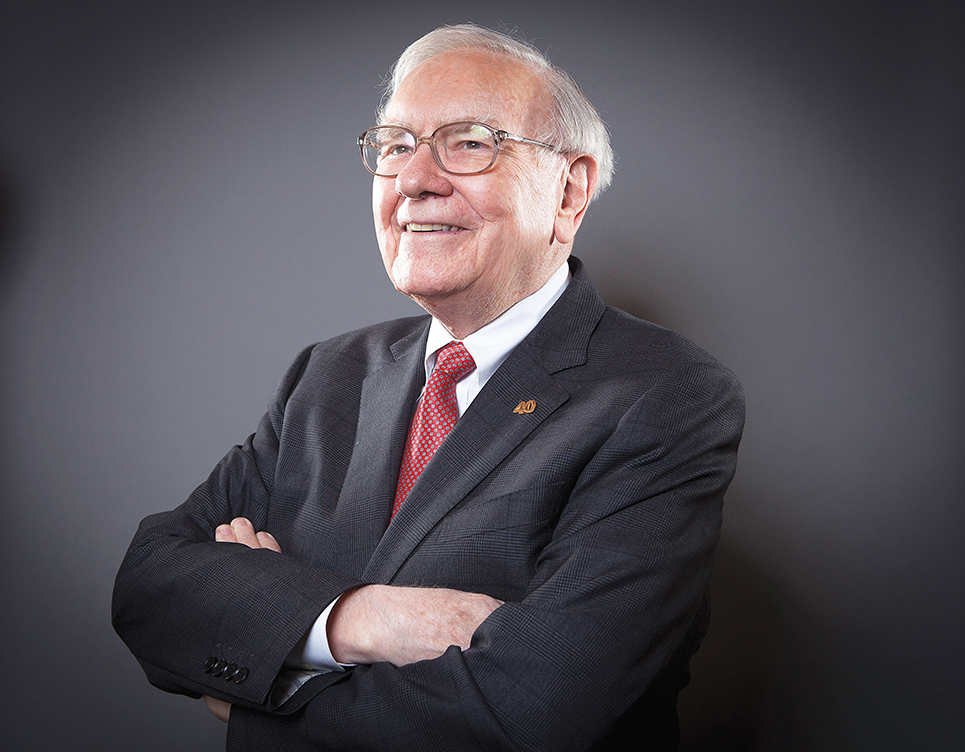 Fancy a spot of lunch with Warren Buffett? It may cost you. In fact it could cost you $3,300,100. That’s the sum paid by an anonymous bidder in June to win a lunch date with The Oracle of Omaha. If that sounds like a lot of money, it should be added that the bidder can bring along seven guests for the meal at the Smith & Wollensky steak house in Manhattan, so it only amounts to $412,512 per person, and it probably includes a glass or two of wine.

In any case, it is comparatively cheap compared to previous years - this year’s bid was been exceeded twice in the last six years.

The auctions for lunch are designed to raise money for the Glide Foundation, a San Francisco charity for people who are homeless or battling substance abuse, and over the last 19 years the luncheons have raised $29.6 million.

Buffett’s fund-raising efforts are legendary, and the bidders are more than happy to contribute to the good causes. But what they really want is to spend time with the 87-year-old who has become the most respected business icon of his generation.

Businessmen Guy Spier and Mohnish Pabrai spent $650,100 each in 2007 and they told CNBC, the American business news channel that it was worth every penny. Pabrai said, “I think we would have been willing to pay a lot more than that.”

Buffet then said: ‘If you know how to answer that correctly, then you have the right internal yardstick.” (In case you are wondering, the best answer is the first one!)

The two businessmen left the lunch star-struck and inspired. And they are not alone.

The Q&A sessions are watched intensely, when Buffett candidly answers any question that is thrown at him, with proceedings lasting over five hours. The whole event lasts three days with over 12,000 attending what has become known as the ‘Woodstock of Capitalism’.

So what is it about this unflashy octogenarian who inspires such love - and so rarely arouses the raging envy you might expect of a man so ridiculously wealthy?

There are two key reasons why Buffett is so admired.

Firstly, he is just so damn good at what he does. He almost always chooses the right companies and he knows what they need to achieve their full potential.

Secondly, he goes about his business in an ethical way and uses his wealth to forward good causes.

The successes of Warren Buffett

Warren Buffett is no longer the world’s richest man. He has been overtaken by Jeff Bezos and Bill Gates, and Mark Zuckerberg is pushing him close for third place. As of June 20th 2018, Buffet was just $29m ahead of the Facebook founder, which may sound a fair bit of money, but not when you consider both are worth an estimate $81.6billion.

One thing is for sure, Buffett is slipping down the billionaire league table -  but not because he is losing his touch. Since 2006, Buffett has given 290 million Berkshire Hathaway Class B shares to charities, which according to Bloomberg are worth more than $50 billion. He can’t give it away fast enough!

So how did Buffett accumulate such wealth?

Firstly he started early. Unlike many tycoons, he didn’t inherit huge sums, his wealth accumulation came from his own efforts, and he started as a child, buying his first shares at the age of 11. He had three shares in ‘Citi Service preferred stock’ which he bought for $38.25 each. He sold in 1944 at $40, making about $5 profit. But after selling the price climbed rapidly to reach $200 a share. It was a big lesson for the young Buffett. Within four years he had a portfolio worth about $6,000. (Buffett’s fascinating early days as an investor are documented in Maarten Hoffmann’s profile in Issue 9 of PBM, which can be found at www.platinumpublishing.co.uk/blog/2015/02/warren-buffett-the-sage-of-omaha.)

Buffett had learnt to be patient and he started to hold onto stocks. He has said, “Long term, the stock market is going to be higher, and I’ve written that many times. In terms of what it’s going to do next year or tomorrow, I have no idea.”

This long-term approach became his trademark. He has been more than content to earn modest but consistent returns, which compounded into huge returns in the long run. His methods are hardly rocket science (and he is one of the few super billionaires who doesn’t have a space exploration obsession).

His investment style focuses on fairly straightforward metrics. In short he buys stocks he thinks are fairly priced and that have a competitive advantage over their peers, and then he keeps them.

The Warren Buffett success story really starts in 1956, when he was just 25 years old. He had graduated from Columbia Business School with a Masters in Science and Economics and embarked on a short career as an investment salesman and then securities analyst, but at 25 he decided to make his move.  Vintagevalueinvesting.com reports how he formed Buffett Partnership, Ltd with $105,100 and seven limited partners: his mother, sister, aunt, father-in-law, brother-in-law, college roommate and lawyer. He charged no management fee, took 25% of any gains beyond a cumulative 6%, and agreed to personally absorb a percentage of any losses.

Buffett closed the partnership in 1969, largely because he feared that he could not maintain such an incredible run of success. With the changing nature of the markets, any success would, he believed, be more down to luck than good judgement and he didn’t want to risk other people’s money.

Of course, he hadn’t lost the Midas Touch but it is typical of the way in which he always acts with a sense of integrity.

During the successful years of the Buffett Partnership, Buffett made what he describes as his worst investment by taking the majority shareholding in a traditional textile company called Berkshire Hathaway.

Wikipedia reports that in 1962, Warren Buffett began buying stock in Berkshire Hathaway after noticing a pattern in the price direction of its stock whenever the company closed a mill. Eventually, Buffett acknowledged that the textile business was waning and the company’s financial situation was not going to improve. In 1964, the owner Seabury Stanton made an oral tender offer of $11½ per share for the company to buy back Buffett’s shares. Buffett agreed to the deal. A few weeks later, Warren Buffett received the tender offer in writing, but the tender offer was for only $113⁄8. Buffett later admitted that this lower, undercutting offer made him angry. Instead of selling at the slightly lower price, Buffett decided to buy more of the stock to take control of the company and fire Stanton (which he did). However, this put Buffett in a situation where he was now majority owner of a textile business that was failing.

It was a rare occurrence of Buffett making a decision through a negative emotion. Buffett kept the name but moved the focus of the business into insurance and it became the holding company for Buffett’s investments. And there were plenty of those.

To list the assets of Berkshire Hathaway would take up all the space allocated to this profile. Berkshire owns outright dozens of American companies which most UK readers will have never even heard of, but are all sizeable concerns on their own. For example it owns Benjamin Moore & Co. (worth an estimated $1bn), ACME Brick Company ($600m) Dairy Queen ($585m), CORT Business Services ($467m), and the list goes on.

Berkshire is currently active in over 70 business sectors and employs over 300,000 people. Not bad for someone’s worst ever investment.

One of Warren Buffett’s much-used phrases is: “If you get to my age in life and nobody thinks well of you, I don’t care how big your bank account is, your life is a disaster.”

What other people think seems to matter to Warren Buffett, and he has always placed great emphasis on doing business with integrity. In many ways he has always been light-years ahead of the game. In recent years there has been a lot written about the benefits of mindfulness. Buffett has been practicing this for years, even if he never applied this particular label.

He has said, “There’s one investment that supersedes all others: invest in yourself. Stay healthy on all three planes, mind, body and spirit: eat good food, drink plenty of water, read, and never stop learning.”

He adds that, “I insist on a lot of time being spent, almost every day, to just sit and think.” Hardly the high-powered, 100-mile-an-hour culture of Wall Street. You could never imagine Buffett declaring that lunch is for wimps.

If he is ahead of the game on mindfulness, he is even further ahead on female equality in business. In the 1950s at the University of Nebraska, he set up a course entitled Women and Investing, aimed to get women involved in stocks and shares. The inequality of opportunity has always outraged him and he is quite clear about how much of an advantage he had by being born male: “One of the reasons for my success was that I was only competing with half of the population. Life is a lottery. I had a 50% chance of being born female with the same IQ and talent, which would have made career options as limited as my sisters. Women have the same potential as men; it is our duty to help them to release it.”

Warren Buffett is now an active supporter of the Lean In movement which was created after a TEDTalk by Facebook COO Sheryl Sandberg in 2010. Sandberg spoke of the way that women are held back—and the way women hold themselves back. After viewers around the world shared their own stories of struggle and success, Sandberg wrote a book called Lean In, challenging women to change the conversation from what women can’t do to what they can do. Buffett is in full agreement: “Look what’s happened over the past 300 years using half our talent. Just imagine what’s gonna happen when we go full blast with 100%.”

And then, of course, there is the legendary philanthropy. Another quote from Buffett explains his thinking: “If you’re in the luckiest 1% of humanity, you owe it to the rest of humanity to think about the other 99%.”

CNBC reported that Buffett topped the list for billionaires who gave the most since 2000, an estimated 71% of his fortune.

Not content to give away huge sums of his own money, he has applied pressure to his fellow tycoons to do the same. Created in partnership with Bill and Melinda Gates, the Giving Pledge came to life in 2010 following a series of conversations with philanthropists around the world about how they could collectively set a new standard of generosity among the ultra-wealthy.

The mission statement is: “The Giving Pledge is an effort to help address society’s most pressing problems by inviting the world’s wealthiest individuals and families to commit to giving more than half of their wealth to philanthropy or charitable causes either during their lifetime or in their will.”

With a track record of philanthropy, integrity and an unbeatable ability to spot a good deal, it’s no wonder that businesspeople pledge millions for lunch with Mr Buffet.

But there is a catch. There is a strict rule at the lunches. Buffett will discuss anything apart from what he might invest in next. In that case I think I’ll buy a sandwich instead.