READ NEXT
Business Travel - A guide to Rome 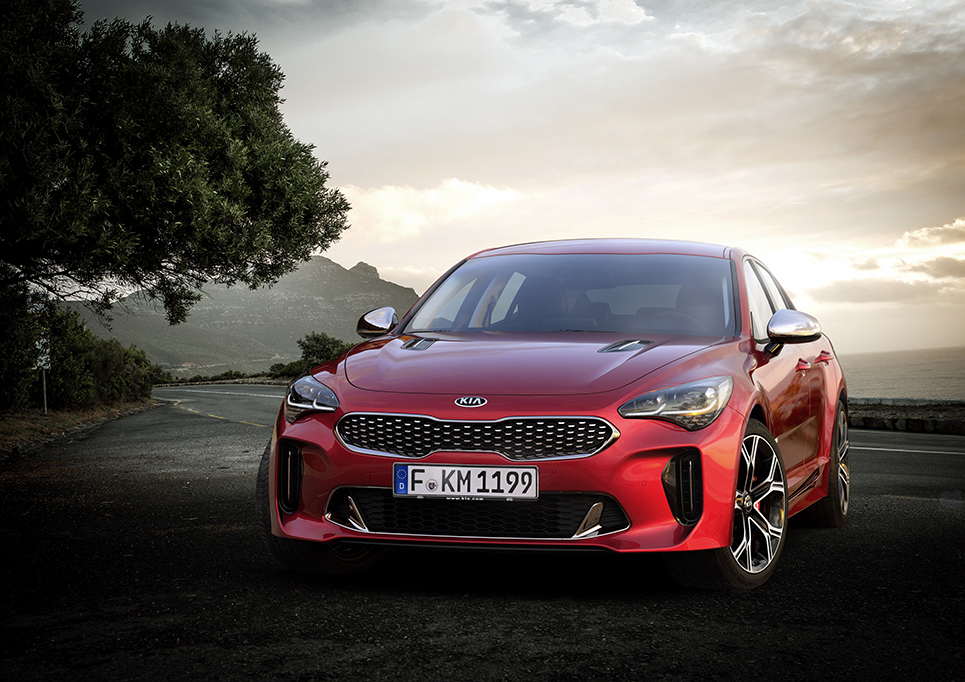 Kia have long be known as a producer of quite good, small cars but nothing that will really stimulate you. You might say they are for people who don’t know much about cars and just want to go, economically, from A to B. Nothing wrong with that but personally, l would rather self-harm with a blunt razor. It is not about the destination, it is about the journey.

Now l am confused as they have just produced a cracking car with great looks, great power and great practicality. The names a bit daft but what a lovely surprise.

The top of the range model boasts a twin-turbocharged 3.3-litre V6, delivering 356 horses and and that means 0-60 in less than five seconds. But it’s not the straight-line oomph that impresses most. It’s the way this car feels as you go about your business: a bit special. It certainly has the whiff of a BMW 3 Series about it and maybe this is because the Stinger was developed by Albert Biermann, who was poached from his previous job running things at BMW’s M division. You can sense his DNA in the Stinger. My 2.2-litre has a good amount of get up and go.

This is their first rear-wheel drive car and, in my opinion, their first really great looking car. OK, you have to overlook the fake vents in the bonnet but this car is very well sorted, well put together and drives really well. It think the Germans might have to pay some attention here.

Yes, there’ll be plenty of you looking at those prices and exclaiming in horror at the prospect of a £40,000 Kia. A Kia instead of a BMW 4 Series Gran Coupe or Audi A5 Sportback? This doesn’t worry Kia. Its primary targets are American and East Asian sales, where customer badge envy is less prevalent, and the Stinger’s huge equipment checklist will help to shift it. European sales are predicted to only make up seven to ten per cent of the Stinger’s total, and in the UK there’ll only be about 1,800 a year finding homes. Over here, the Stinger is supposed to catch eyes and impress punters as it sits among the Kia range in the showroom, or on the website.

My 2.2-litre GT-Line S version drives really well and the 3.3-litre V6 will keep pace with the BMW 440i. I would avoid the diesel and stick with either the 2.0 or 3.3 petrol - they fly. It is also very well equipped and one might say, over-equipped. With five settings each for the steering, ride and suspension and with so little noticeable difference between any of them, it is rather pointless. Then the modes - Comfort and Eco kill the huge attraction of this car and make it a tad turgid. Then there is Smart, which is supposed to learn your driving habits and adapt to them. Daft. Switch it to Sport, rip the knob off and chuck it out of the window - this is how the car was designed to be driven. This adds a bit of fake noise, tightens up the steering and suspension. Settled into Sport Mode, the Stinger sets about pleasantly surprising you. It steers accurately, and the variable ratio set-up isn’t so overly rapid that the front tyres get caught out every time you pour it into a corner.

Inside is a nice place to be and does not suffer from that normal Japanese/Korean smell of a multitude of melting plastics. Drop into the comfortable driver’s seat and you’ll discover it can be shunted reasonably low, ahead of a vertical steering wheel with plenty of reach adjustment. Ahead of you sit clear dials, bookending a 8.0in screen that will show you everything from temperatures and pressures to a G meter, nav directions and so on.

Climb into the rear and so long as the driver hasn’t taken full advantage of the seat’s lowliness, there’s footroom, plus decent legroom and more headroom than you’d expect given the sweeping silhouette. The boot’s 406 litres can be expanded to 1,114 litres by pulling the handle that flips the rear backrests forwards, but they don’t lie flat, as is usual in this class.

Kia’s dealers have a stellar reputation and plenty of customer service awards. The Stinger is subject to the range’s seven-year warranty. Reliability is strong across the range. It all bodes well for the Stinger actually being a more painless thing to own than its posher branded rivals. And then there’s the value. All Stingers, which are GT-line trim or higher in the UK, get a wealth of equipment. The standard 8.0in touchscreen has sat-nav, Bluetooth and speed camera warnings. ‘Basic’ models have a nine-speaker hi-fi, toppier ones have 15 speakers.

The V6, at 244g/km, has higher emissions than a two-tonne V8 Porsche Panamera Turbo. This is one respect in which Kia really doesn’t want to be beating Porsche.

55 Do you know how healthy your workforce is?

55 Would you benefit from a drink coach

Dry January is coming to an end, but it is still wise to keep drinking habits sensible. There is help available online....

55 Why wellbeing at work matters

Viisana is one of Vitality's largest exclusive associate brokers. The name ViiSana is derived from the Spanish term vida-sana, which...