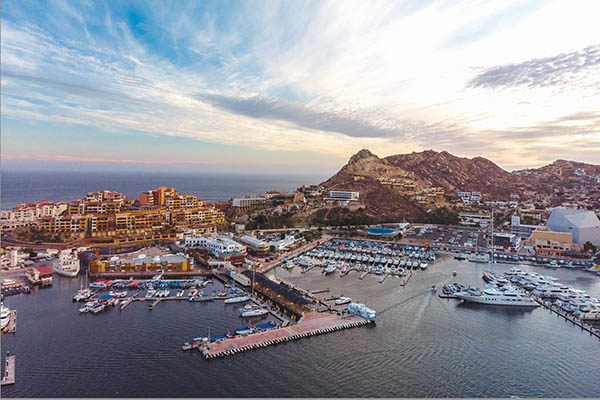 Nestled at the tip of the Baja California peninsula in the Mexican state of Baja Californian Sur, you’ll find Los Cabos – or Cabo, as it’s more simply known. Perfectly sandwiched between the magnificent Pacific Ocean and the Sea of Cortez with its legendary underwater world, Los Cabos (made up of three communities – Cabo San Lucas, San Jose del Cabo and The Corridor) is an international beach lovers’ paradise, where spring breakers flock in their thousands to soak up one of the world’s greatest climates, to luxuriate in the glistening crystal waters of the Sea of Cortez, and party by sunset on one of its many private yachts.

Once a network of sleepy fishing villages known for their incredible marine life, word soon spread, the Americans got wind and transformed this idyllic Mexican hideaway into their weekend leisure and water sport destination. In fact, being one of only four Brits in the long immigration queue in Los Cabo International Airport – the other three being my other half and our two boys – even the Mexicans look out of place here.

Aside from its bevy of A-Listers and jet-setters, I lost count of the number of private jets lined up on the airport’s runway. In its glory days, the Baja California Sur attracted many luminaries including the author Ernest Hemingway and the actor John Wayne, who were both lured in by their love of fishing for black and blue marlin in the 1930s.

The ocean life here also enticed the American author John Steinbeck to Cabo who, after taking a break from fiction, wrote his book The Log from the Sea of Cortez (1951), which details a six-week marine specimen-collection boat expedition he made in 1940 in the Sea of Cortez with his friend, the marine biologist Ed Ricketts. This exclusive destination was also a favoured getaway for the Hollywood set, including 1930s sex symbol and movie star Jean Harlow who soaked up its beauty and took much-needed respite from the limelight.

Some 90 years later and it’s still as breathtakingly beautiful, luring people in with its magnetic charm and wondrous aquarium where you can dive, snorkel, fish, whale watch, swim with sharks and windsurf.

We flew direct with Southwest Airlines from LAX after a ten-day stint in Los Angeles, and just three hours later we were on the road in our A-Team-style van (and yes, we drove with the sides open) heading towards San Jose del Cabo. Approximately 30 minutes from the main town of Cabo San Lucas, San Jose del Cabo is a more low-key colonial style destination, away from the glare of the Cabo cruise ships and Mexican beach sellers, intently playing ping pong with your gaze whilst waving their wares in your face. If you catch their eye, you’re a goner, I’m afraid.

It’s here you’ll find true Mexico. Fast becoming a major art district, its laid-back local scene, Spanish architecture and charming side streets herald the more calmer side of Los Cabo, compared to its wilder sister, Cabo San Lucas. Historically, San Jose del Cabo was the only community at the tip of the Baja California peninsula. With its natural fresh water oasis flowing into palm-lined lagoons at the edge of the Sea of Cortez, the area was home to Indian communities and hundreds of species of wildlife before the colonisation by the Spanish.

Head 45 minutes west and you’ll reach Cabo San Lucas, where the desert meets the ocean (carry on driving and you’ll hit California)! If you can ignore the high rise resorts en route, fast food joints, American chains, Day of the Dead decor, and carnival-esque dancers spilling out of nightclubs, then it’s certainly worth a stopover.

A visit to El Arco is one of the most popular things to do here. Known as a gathering area for sea lions, the arch of Cabo San Lucas is a distinctive rock formation at the southern tip of Cabo San Lucas, where the Pacific Ocean meets the Gulf of Baja California. However, the popularity of Cabo San Lucas as a resort destination has always been directly tied to its reputation for world-class big game sport fishing. Top tournaments are held during the summer and autumn months, with October traditionally being the best month for blue marlin.

Head to Lover’s and Divorce Beaches for some serious sunbathing and when it’s time to eat, sink your toes firmly in the sand at The Office (with a view out to El Arco), where the likes of George Clooney, Leonardo DiCaprio and Jennifer Aniston have been spotted. Menu favourites include coconut shrimp, garlic lobster tails, and fresh tuna. Even though it’s served many a celeb, the prices are inexpensive, the food is generous and the atmosphere is understated where margaritas and huevos rancheros for breakfast are the norm.

Whale Watching
Every autumn thousands of gray whales and humpbacks make their annual 6,000 mile migration from the summer feeding grounds of Alaska to the warm waters of the Sea of Cortez and the Pacific Ocean to mate and give birth. See this fascinating natural encounter and watch the delightful journey of a new mother and baby take place between January and late-April. For private whale watching excursions to Magdalena Bay, visit audleytravel.com

Scuba Diving
Diving in Cabo San Lucas is easy enough for a true beginner yet offers challenges for the most expert diver. Beginners will enjoy the protected rocky reefs of San Lucas Bay, intermediate and advanced divers can head outwards toward the dramatic walls just offshore, and the submerged pinnacles and deep wrecks located at the join between the Sea of Cortez and the Pacific Ocean are reserved for the most advanced divers. Submerge yourself with schools of rays, jacks and butterfly fish. 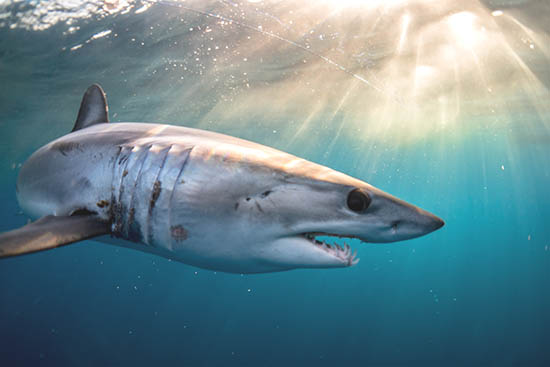 Shark Diving
Sharks can be seen at nearly every opportunity in marine park of Cabo San Lucas and the Corridor (the mouth of the Gulf of California and the Sea of Cortez). The currents from the Pacific which clash with those of the Sea of Cortez make this a unique environment for marine life, with deep canyons and nutrient plenty crystal clear waters. You’ll see blue sharks, silky sharks, mako, hammerheads and whale sharks.

Deep Sea Fishing
Cabo is Mexico’s top fishing location and known as the ‘marlin capital of the world’. The upwelling of nutrients brings in enormous shoals of sardines, herring and small bait fish, pursuing these come bonito and skipjacks up to 30 lbs, and hunting them are marlin, sailfish, tuna, dorados and razors. Catch a day’s fishing charter which range from inexpensive pangas to large 50ft+ luxury yachts. A day’s fishing trip package should include the boat, fuel, captain and licensed crew, fishing tackle, bait, fishing license, ice, food and drink.

Solaz Los Cabos
Offering a world class spa, infinity pools and contemporary architecture, Solaz Los Cabos is a nature-inspired resort and part of the Luxury Collection Hotels and Resorts group. Located midway between Cabo San Lucas and San Jose del Cabo and nestled between two nature rocks beds, it offers guests one of the only swimmable beaches in the area. Check out its sustainable lush ‘dry jungle’ that features endemic species and flora.
www.solazsignaturesuites.com 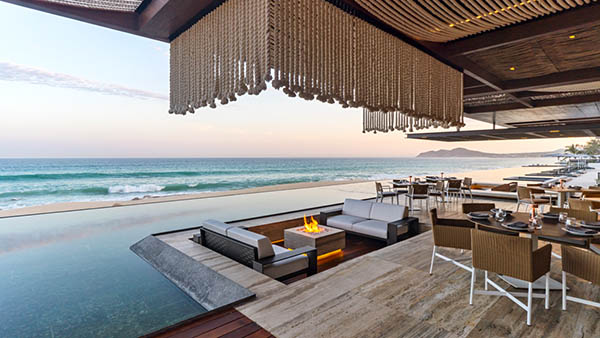 Flora Farms
For idyllic Mexican dining head to Flora Farms, a 25-acre organic working farm in the foothills of the Sierra de la Laguna Mountains in San Jose del Cabo – home to Flora’s Field Kitchen, The Farm Bar, Flora Farms Grocery, Farm Spa, homeware stores and coffee shop. All the food featured on their menu is seasonal, grown, and raised on site where possible. With open plan dining complete with cooling mist jets overhead, I highly recommend their cocktail list and shrimp salad. On site is an ice cream parlour and pizzeria for the kids – the perfect day out.
www.flora-farms.com

The Edge is Ford’s effort to attack the premium crossover market and rival the likes of the Audi Q5, BMW X3 and Volvo XC60, and...