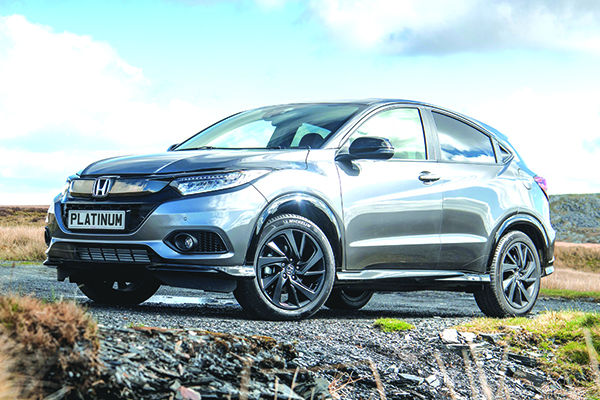 The HR-V has been with us since 1999 and has undergone multiple facelifts since then. I couldn’t resist looking up the meaning of HR-V – believe it or not it stands from Hi-rider Revolutionary Vehicle. Gotta love those Japs for their very literal description of just about everything.

So, here is their Sport version of this mass-selling car, but is it worth the extra dosh? It gets a few subtle sporty tweaks but the engine is where the attention lies. They have fitted a turbocharged 1.5-litre VTEC from the Civic Sport, pumping out 180bhp and driven through the front wheels. Honda claims 0-62 in 7.8 seconds. This is hot hatch territory and with some subtle body kit changes and tighter suspension, it is a quick SUV. In the vein of every other manufacturer, Honda are at it with the fancy words – this one has Synaptic Damping Control – a fancy phrase for uprated dampers aimed at sharpening the body roll without ruining the ride.

It is quick, rides well and the interior is pleasant. The trouble is, with a price of £29,000, it places it in the range of some seriously good cars like the Seat Ateca, Golf GTl and high-spec Ford Focus. In that company, the shines dulls a tad.

And here’s the kicker – l do not like Japanese cars and never have (saying that makes me feel as if l am at an AA meeting). There is something about their lack of flair, their odd shapes under the guise of ‘funky’ and their dull interiors and performance. I wish l could be more erudite on this subject but they just bore the pants off me. It’s like they iron all their cars so that there is little personality, no thrill and the feeling that we are all in some ghastly dystopian world of vanilla. It’s like Birkenstocks and sweat pants - for people who have just given up on life.

I had high hopes for this much-heralded Sport version but it is just quick vanilla.

The Edge is Ford’s effort to attack the premium crossover market and rival the likes of the Audi Q5, BMW X3 and Volvo XC60, and...