READ NEXT
Brighton Summit - Crack On 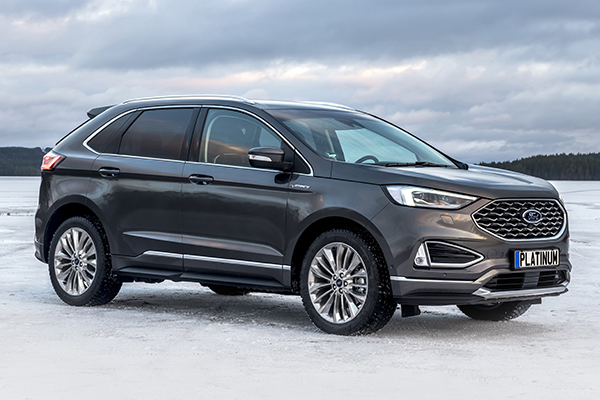 The Edge is Ford’s effort to attack the premium crossover market and rival the likes of the Audi Q5, BMW X3 and Volvo XC60, and is based on the same platform as the S-Max and Mondeo – and not an attempt to supplant U2’s guitarist.

It’s big, running to 4.8 metres in length and 1.9 metres in width and weighing in at a hefty two tonnes. I like it. It’s bold, a tad brash and has a significant presence on the road. This SUV segment is ever-growing it would seem, with a 24% year-on-year increase in sales. Ford are grabbing large chunks of this market with their smaller Kuga and the even smaller, EcoSport.

The Edge is not available with a petrol version (groan), and the choices are a 2.0-litre diesel pumping out 178bhp with a six-speed manual, or a 207bhp variant with a six-speed ‘Powershift’ auto that l currently have under my bum. It’s quick enough but will not blow your skirt up; smooth, stable and well-planted on the tarmac. The 178bhp model is way too turgid and even overtaking can be an effort as it is dragging two tonnes around.

Inside, it is well equipped with very comfy seats and it is remarkably quiet. We have something here called Active Noise Control. Clever stuff, as it has microphones that pick up undesirable noise and instruct the speakers to send out opposing sound waves to counteract the unwanted racket. Stand outside though and, like all Ford diesels, it sounds like a black cab or a transit van rattling into life.

Although the Germans have been building Panzer-tank solid cars for donkeys’ years, Ford and Volvo have finally caught up, and this car feels German-solid, well-built, rugged and, with all-wheel drive as standard, a go anywhere style. It lacks seven seats, which is a shame as there is plenty of room for the third row, but all in all, this is a very good car – and it needs to be. The competition is fierce with Germans on every side but they have made a very good fist of it.