READ NEXT
Will agile working be the new norm? 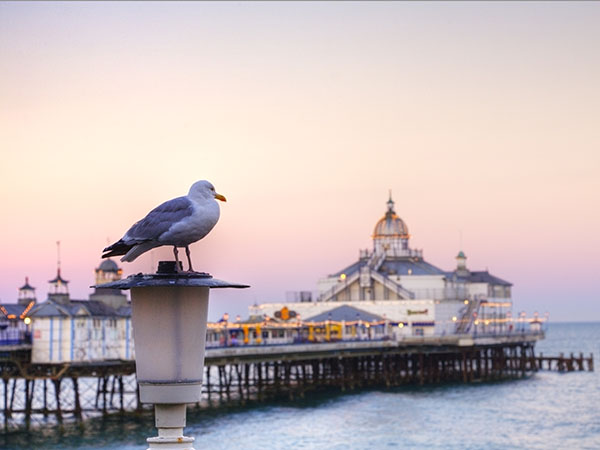 The Arndale Shopping Centre has been successfully extended and rejuvenated, with a fresh new rebrand, the Devonshire Quarter project has created a cultural destination hub and another shopping centre has also benefited from an injection of new shopping units and a 24-hour gym.

Over the following pages we take a closer look at these exciting projects - all of which represent a huge vote of confidence in the town.

The Beacon shines bright
The face of shopping in Eastbourne has been transformed with the opening of the £85 million extension of newly rebranded shopping centre, The Beacon.

This month, the state-of-the-art eight screen Cineworld is due to open in the extension on July 12th, in time for the highly anticipated live action adaption of Disney’s The Lion King.

New signings just announced for the first floor of the extension were Taylor’s Restaurant and Sports Bar and The Bok Shop, a gourmet fried chicken restaurant.

Both restaurants are independents. Taylor’s will be run by Mark Taylor, son of Colin and Sharon Taylor, who own well-known restaurant Shades in The Beacon. The Bok Shop, is a Brighton-based business run by Howard Kaye and Jamie O’Mara, and Eastbourne will be their second restaurant.

The first phase of the extension was opened just before Christmas with the arrival of H & M, Next, FatFace, Schuh, Jack Wills, New Look, Flying Tiger and Paperchase. Their opening also marked the switchover of the former Eastbourne Arndale Centre to The Beacon with the launch of a brand-new website and the changeover of all social media channels and signage.

The 170,000 sq ft extension is being funded by Legal & General. The official two-day launch of the new Centre, with a packed programme of exciting attractions, will be held in the summer.

Andrew Rice, Fund Manager at Legal & General, said: “Eastbourne is really bucking the trend in the UK with this development. Local people have been waiting for a long time for this and we were delighted to open the first part of the extension before Christmas and now look forward to the opening of Cineworld in July that will bring an exciting night-time economy to the town.”

“We continue to work hard behind the scenes to bring more stores to Eastbourne and expect to announce new names soon.”

Newly opened in time to be a support venue for last month’s tennis international tennis tournament, the Welcome Building provides conference halls, break out and hospitality areas, the site’s central box office, and a fully accessible entrance to the Congress Theatre and Winter Garden. It also boasts a café with views across the lawns opening this month.

The building has been designed to maximise natural lighting and the roof is fitted with photovoltaic solar panels as part of the town’s commitment to drive down CO2 emissions.

A two-year renovation of the Congress Theatre was completed in March and the Grade II* listed building was re-opened with a spectacular sell-out show by the London Philharmonic Orchestra.

There has been much acclaim for the attention to detail in bringing the building back to the glory of its first opening in 1963, while visitors also enjoyed modern enhancements such as new heating and air conditioning. Other behind-the-scenes improvements include a new state-of-the-art lighting bridge and replacement of old electrical equipment.

The Devonshire Park Theatre has undergone internal and exterior refurbishments, including structural repairs to the tower, repairs to the roof, windows and doors, heating improvements and full redecoration. This work has made the visiting experience even better for theatre-goers.

Work will start later this year on the Grade II listed Winter Garden. Working in partnership with English Heritage, the historic character of the 1875-built Winter Garden will be enhanced by the reinstatement of its original features and architecture.

Meanwhile, tennis facilities both on and off court have seen considerable improvements including the building of a new players’ village, a new show court and state-of-the-art irrigation system.

In addition, extra practice courts have been seeded and will be ready for the next international tournament in 2020.

Delivered in partnership with the Lawn Tennis Association (LTA), these extensive enhancements were pivotal in confirming the venue for the flagship Eastbourne International Tennis event until at least 2026.

Outside, a new plaza has been created to provide an attractive gateway into the theatres, conference facilities and Towner Art Gallery, and ensure that Devonshire Quarter is fully accessible to all visitors.

Lift Off for Langney

The exciting year-long building project includes the creation of 13 new shops, a 24-hour gym, resurfacing of the car park and an improved layout.

A number of jobs will be created as a result of the scheme at the popular district shopping centre in Kingfisher Drive when it opens in September.

The centre is already home to more than 30 retailers including Tesco, Poundland, Iceland, Peacocks, Card Factory and The Works. Outdoor markets every Tuesday and Saturday also pull in the crowds.

New stores already confirmed for the extension include Home Bargains, Costa Coffee and Snap Fitness gym. Home Bargains sells top brands at low prices and is the highest ranking discount retailer in the UK, while Snap Fitness has 2,000 gyms in 27 countries with more than a million members worldwide and Costa Coffee has been voted the country’s top coffee shop for nine years running.

The centre isn’t just about retail – it’s also home to the local library. The centre management team stepped in to help rescue it after East Sussex County Council axed a number of local libraries to save money. A band of volunteers formed the Langney Community Library CIO (Charitable Incorporated Organisation), which is run by a group of trustees, and centre managers provided a unit rent free.

As well as book lending, the library has laptops and offers a printing and photocopying service. The dedicated volunteers are also developing a community hub for hire by local groups.

Centre manager, Neil Avis, said: “It’s a tricky time in retail across the country at the moment but we’re confident that by investing in our shopping centre and diversifying into other community ventures such as the library, we’ll have plenty to keep our customers coming back.

“The builders have done an excellent job and are expected to hand over the completed structure to the individual shops ready for them to fit out in August. We’re all looking forward to seeing the finished extension soon after that,” he added.

Langney Shopping Centre first opened its doors in 1973 and is thought to be the first district shopping centre of its kind in the UK. The extension will add an additional 35,000 sq ft to the original structure, taking the total area up to 115,000 sq ft.

Talks are already underway for the next phase of improvements at the centre which could include a new health centre.