Every season, our primary goal is to stay in the Premier League. But we have to have more than that

READ NEXT
Do you need a financial adviser? 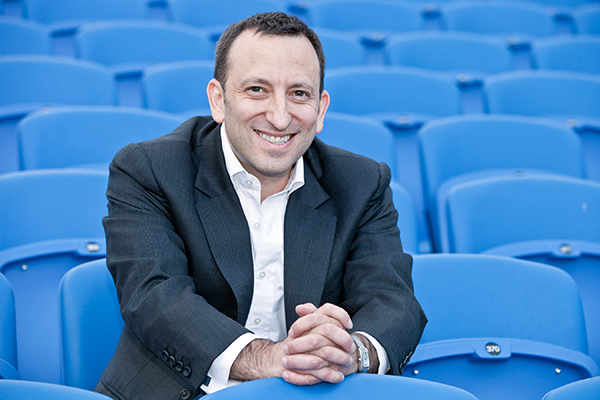 While Brighton & Hove Albion was going through its long-running saga to get planning permission for the new stadium during the noughties, Tony Bloom was in the background, putting his hand in his pocket as and when needed. In 2009, in the aftermath of the banking crisis which threatened to de-rail the whole project, he made an offer to the club. Bloom would fund the construction of the stadium himself in return for control of the club. On May 18th 2009, Tony Bloom became Chairman of Brighton & Hove Albion.

Just over 10 years on, The Albion Roar went to see Tony at his StarLizard offices in Camden Town to see how that first decade had gone for him.

“When I first started going in 1977, and it was all very positive, and we were winning lots of games, getting promotion, I thought ‘this is what football is all about’, it was great. Then, we had the FA Cup Final in 1983, and things started going downhill. But I always knew we had a great fanbase, so when we got to 2009, I had the confidence - some people might call it misplaced confidence - that we would one day get to the Premier League. But we needed that stadium. And with the stadium, I also realised we needed a training ground fit for the Premier League. That was obvious to me fairly early on.”

When it comes to the funding for the stadium, something which the banking crash would have scuppered –every bank pretty much drew up its drawbridge – Tony appears to take a fairly relaxed attitude. The figures are eye-watering, and yet they get mentioned as if he were reading from a menu. “When we were putting the funding together, I was always going to put in a good amount of the £100 million in. Brighton were are the bottom of the third division, and the banks wouldn’t have taken the risk.

“I am a fan,” he states with obvious glee, “I was prepared to make the commitment. I am sure other fans in the same situation would have done the same.”

As an investment of the heart goes, Bloom is probably correct; many fans would indeed do the same. But that’s only in your own fantasy; reality is a very different thing. According to football finance expert, Kieran Maguire, the club exists, and thrives, thanks largely to the £300 million plus Tony Bloom has put into the club to date.

The structure of top-flight football financing, especially for a club of Brighton’s size, spending so much in time and resources to grow to a level where they can compete with the larger Premier League clubs does not allow for any notion of profit to be made.

As Chief Executive and Deputy Chairman Paul Barber stated, while the club were in the aiming for promotion to the Premier League, “It’s just not possible for a club in the Championship to make a profit if they have real designs on making it to the top flight.”

“As we all know,” confirms Bloom, “it’s difficult to run football clubs on a sound business footing. Revenues, income and costs are all out of kilter. The only way it can really work is if you become an established Premier League club.”

While the investment in the stadium, the training set-up and the whole infrastructure has been - and still is - an enormous commitment, it’s something Bloom made the decision to undertake in 2009, and see it through.

But he hasn’t done it alone. Unlike some Chairmen whose names spring to mind, Bloom is smart enough to know what he doesn’t know, and is quick to pay tribute to those around him.

“I think we are really lucky to have such an amazing CEO as Paul Barber, who’s done such a magnificent job. He’ll be there six, seven days a week. It’s a huge commitment, and just... be there. It’s not because I expect it, it’s because he wants to. He’s watched every game – he hasn’t missed one since he arrived in 2012.

“We’re also so fortunate to have Dan Ashworth, one of the best technical directors around. It’s about getting the football right. He is overseeing all aspects of the football; he is a great fit for this football club.

“I can sleep well at night knowing I have this team at hand.” 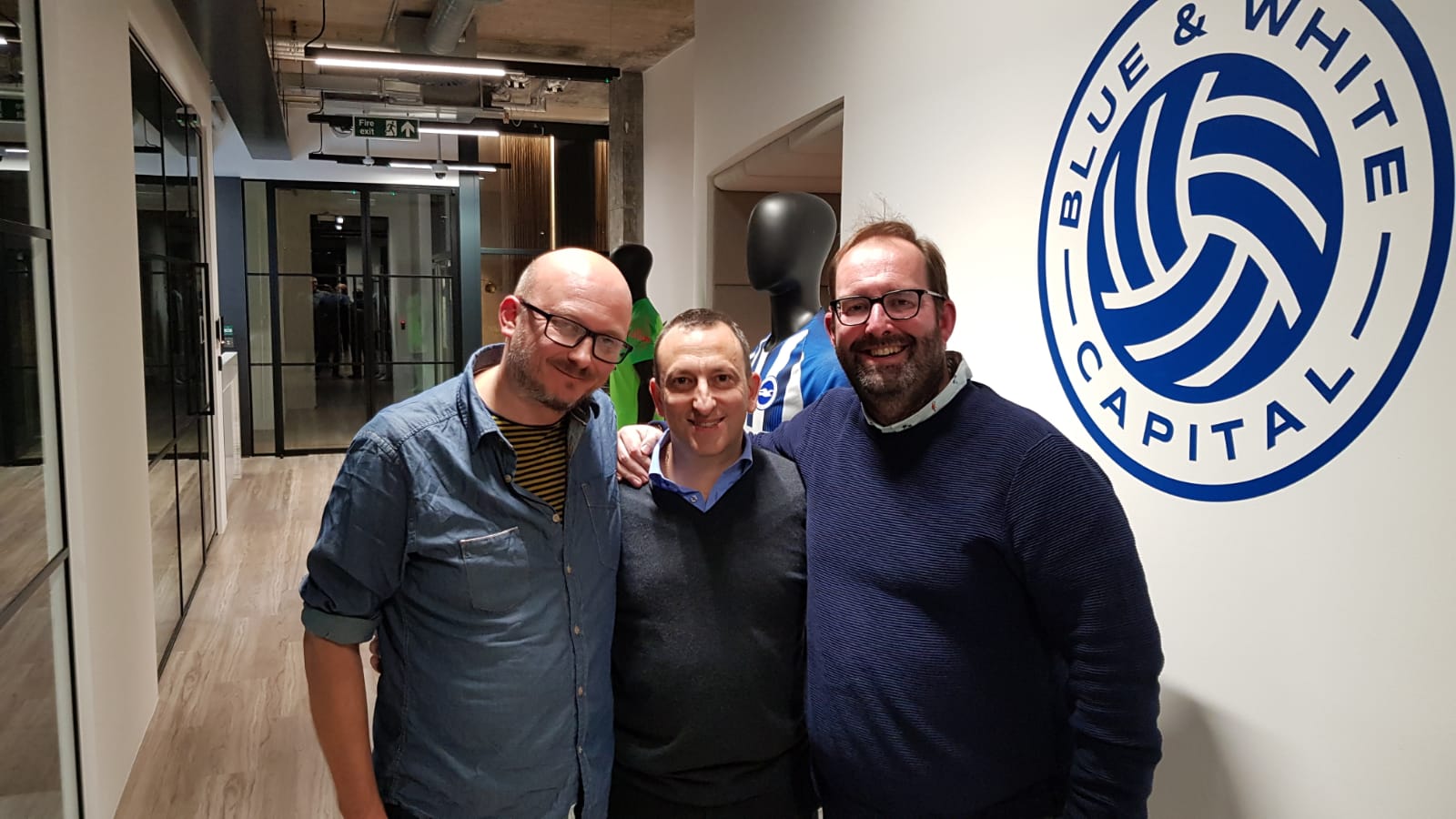 Bloom also apologised to Martin Perry, after Ady’s accusation that Bloom wouldn’t let him retire. “Martin’s been brilliant for this football club. Ever since his wonderful work in getting the planning permission for the stadium through, we’ve had a further 60 applications put in, and all went through apart from one.

“I’ve also got to say what a brilliant board we’ve got. The club is so much stronger with everyone who is on it. I didn’t know everyone before they joined, but they’ve all become good friends, and do a fantastic job.”

The Bloom family involvement in the Albion’s boardrooms going back to 1971 has been well documented. Tony’s grandfather Harry was vice-Chairman, and was even portrayed (albeit in a non-speaking role) in the film The Damned United, while Uncle Ray has been a board member through the hard times and the good. Tony is at pains to point out their influence upon his own role in the club.

“We’re very aware of the fact that none of us would ever let the club die, and there’s hardly been a year since then when either my grandfather, my uncle nor myself haven’t been on the board. We’re very proud of that.”

Tony’s humility, to the point of reserved guardedness (occasionally a sliver of information ekes its way out of the boardroom), is very evident when talking about his role as Chairman. It’s a privileged role, and he is acutely aware with the notion that Chairmen are only ever custodians of the club; it’s the club itself and the fans which are the constant. However, when you get him on the subject of being a fan, the reserve disappears, and the huge, shy grin is broadcast.

I point him to the images of him jumping around like a schoolboy seconds after the final whistle of the match against Wigan Athletic, a victory which assured Brighton’s promotion to the Premier League in 2017.

“It was all our dreams come true. We knew before the game that we were nearly there, and a lot of things would needed to have gone wrong for us not to be promoted. However, when the final whistle went…” he draws breath and takes himself back into that moment, “like many fans, I completely lost it. It was just ecstasy. We went on till 2am that night. Big hangover. We’d had so many near misses, but full credit to Chris [Hughton] and the players.”

Looking ahead to the future, the board have it in mind about the next phase of the club’s development. It is widely recognised that forever ‘avoiding relegation’ is no longer enough. At the Fans’ Forum in August, Bloom, along with Paul Barber, outlined briefly their plans to make Brighton a top 10 Premier League club. The idea is to do things incrementally, and patience is something the supporters must contend with. Aside from the move to the stadium, and promotion to the Premier League, the Albion have moved forward step-by-step.

“Every season, our primary goal is to stay in the Premier League. But we have to have more than that. Anything can happen to a club like ours, but we have to have ambition; to have lofty goals. We are setting our targets on being in the top 10. It will be hard, we’re not setting a timeframe, but it is achievable. If you aim for top 10 and finish eighth, then the following season miss that target and finish 12th, it’s not the end of the world. But if you aim just to stay up and miss, you get relegated.

“The great thing is we have the infrastructure in place, we believe we have the people in place. We need to spend more to do it, but just throwing money at it is not the way to go. We’re not going to have a top 10 budget, so it’s all about smart recruitment on one level, and having a Head Coach like Graham [Potter] who can improve what we already have.”

The club is clearly helped by its ongoing partnership with American Express, especially with the latter’s caveat of having funds to specifically promote the women’s game.

“American Express has changed the way we have business partners. They’ve been involved with the club for the past 10 years, and we are delighted that they have renewed. It’s so important to the club that we have a vibrant and successful women’s team.”

With so much of the infrastructure in place, Bloom takes a moment to consider what it means to be Chairman of the Albion.

“I have to balance the business side of being Chairman, and the emotional side of being a fan. But however much I want to go for this player or that player, I must stick to the business model because in football it’s so easy to let it get out of control. It’s a huge honour, a huge privilege, and it’s a role I take seriously.”

The Albion Roar is broadcast every Saturday at 12pm on Radio Reverb 97.2FM, and on podcast on Audioboom.