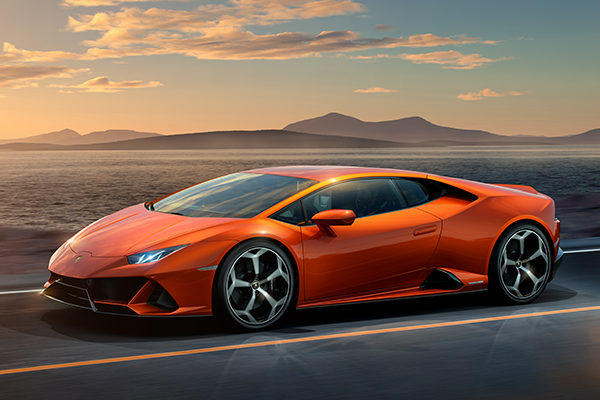 The word Lamborghini has always conjured up evocative thoughts of eroticism, drama, Monaco and movie stars - oh, and death. Death because that is how many people ended up if they were not paying very keen, laser like focus on their driving at all times. The Lambo was never easy to drive, never relaxing, always on the ragged edge and that is why we admired them but rarely ever bought them - just too much in a busy 21st century life.

The old tractor maker that is Lamborghini remained on that path until the company was purchased by the VW group and placed under Audi control back in 1998. The Germans of course do not like killing their customers as it is very bad for repeat business and they took to smoothing out the wrinkles and producing cars that can actually be driven. Their current line-up is the V12 Aventador, the V10 Huracan and the all-new FWD Urus. I reviewed the Urus back in April and the Aventador is in the garage for next week so l will concentrate my focus on the new Huracan Evo.

Anything the company does has to square up to its natural enemies - Ferrari and McLaren. The step change here over the original Huracan is what they call Lamborghini Dynamic Veicolo Integrata or LDVI, a super computer that controls everything including your ability to kill yourself. LDVI rules over everything on the car from the chassis to the powertrain and includes a predictive element. They claim the Evo model has seven times more aero efficiency than the previous model.

In addition, there’s a set of accelerators and gyroscope sensors positioned at the heart of the car’s centre of gravity, which provide real-time monitoring of lateral, longitudinal and vertical loads, as well as body roll, pitch and yaw. The suspension’s magnetic damping is also part of the equation, as is the traction control, the Evo’s all-wheel drive, torque vectoring, dynamic steering, and the active rear axle.

So what of it? Mightily impressive is all l can say and if l hadn’t written it l wouldn’t know that all that computer jazz was going on - and l don’t care. Like most drivers, l just want the driving experience of a car that makes me a better driver than l am. Here it is ladies and gentlemen.

The beautiful howling naturally aspirated 5.2 litre V10 at the back of your head, produces 613bhp and is good for 60mph in 2.9 seconds and tops out at 201mph. So pretty is the power plant that they have covered it with perspex for all to see. So far so good but can l keep it on the road? Apparently, my kids like having me around so it is a concern.

The answer very much depends on what mode you pop it into. Strada (road) will allow your granny to drive it - really, it is a sweet little poppet and will poodle around town all day. Sport sees it all sharpen up and get a tad louder and Corsa (track) sees your life flash before you and produces the kind of focus that l would imagine is required to fly Challenger to the moon. The tyre shredding track mode turns almost everything off and this little darling will drift with ease, turn in to corners is incredibly accurate enabled by the four-wheel steering, there is zero understeer helped by four-wheel drive and fast sweeping corners are such a joy that it can often take over an hour to get the smile off your face. Oh, and of course, the Evo computer is never really turned off hence even the average driver really can feel like some kind of superhero.

Forward progression is all well and good but stopping is kinda important and the carbon ceramic brakes do that job very well although under a hard foot, there is a bit of squirrelling going on. It whips through the seven-speed box with ease and if you really feel like it, you can take over with the paddle shift and feel like you’re shifting but you are not - push too far through the gear and the computer takes over and changes for you so really, don’t bother unless you are on a track.

The interior has had a makeover too with a great 8.4in central screen with bespoke graphics and multi-finger gesture control and of course, it will keep you up to date with what the LDVI is up to. The seats lock you in beautifully and everything is at your finger tips. They are very keen on personalisation, therefore a buyer can select from hundreds of interior options for just about everything and of course, each comes with a price but as the saying goes, if you have to ask how much you probably can’t afford it.

It looks beautiful and has a grand stance, the interior is very cool and fits like a glove and that engine is a work of art that makes you never ever want a turbo ever again and at a start price of £206,000, it is well priced for this sector. It will go up against the Ferrari 488GTB and the McLaren 720S and they are both magical supercars and for me, the McLaren is the one to beat and will take some beating if you read my review last year. Do you feel a but coming?

I felt a total prat driving it. They don’t offer a colour that does not look like a crazed 70’s porn star (mine was such a bright orange that it looks like l’ve been tango’d), it is loud enough that everyone hears you coming and the selection of public reactions range from thumbs up to a great car to looks denoting that you are a complete knob. I pulled up at traffic lights in Brighton to look across at three homeless guys on a bench. Something snapped and l realised quite what these cars represent. Over and above the super human engineering that is a constant marvel, it really says ‘l have made it and you have not’. It is such a statement that it starts to work in reverse. It’s too showy, too brash for British roads. Bel Air, Monaco and Portofino are its natural habitats but on British roads, it just makes you look slightly ridiculous.

I don’t drive these type of cars for what you think but for what l think - l love em and could drive them all day long but this beast might be one step too far.

Now, as they remove the Huracan Evo from my sweaty hands and drop the V12 Aventador onto the drive, me thinks l have another week of this. Bitter sweet.

What the new links between Gatwick and China mean for the region ...