READ NEXT
Platinum Cars of the Decade 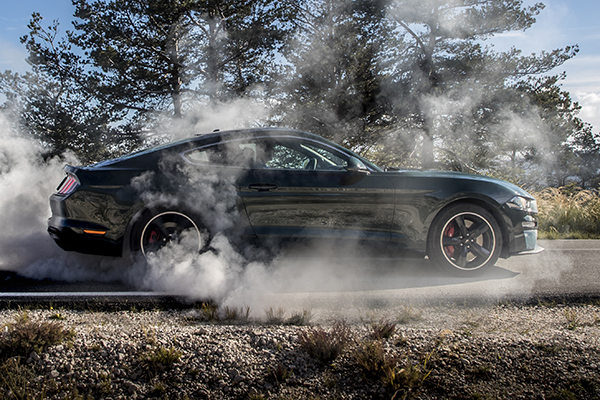 With the majority of American cars today being total garbage, hence you see none on the roads of Europe, it is always a surprise when l am offered one to review. Why do the yanks make such terrible cars that not a single first world country will import them? I don’t know the answer but a fascinating question.

The only yank muscle we see on the UK roads is the new Mustang. I have reviewed this twice now, hardtop and drop top, both 5-litre and both automatic. I like it but you do need to accept its limitations such as remarkably little poke from a thumping great V8, sub standard trim and finishing especially noticeable if you are used to driving German cars and of course, the Ford badge that does little to scream style and class.

I guess the boys at Ford are determined to change my mind as they dropped a GT on the drive and asked me to give it another go. I really like the look of the GT, or Fastback as we used to know it. Now, l need to explain that l am no spring chicken and in the 70’s and 80’s l had a love affair with yank muscle. They were cheap, crazy as hell, fast and furious and no one else had one. We had to import them at great cost until David Overoff opened his yank showroom in Kingston, Surrey and the market cracked open. My favourite of all time was my Mustang Mach 1. I owned two of them in my time and just loved them - l could spin the back wheels in any gear and at any speed such was the unbridled power and it just looked sublime on tiny British roads. Like most old muscle cars, they could rarely go around a corner without a visit with a tree but in a straight line, they were unrivalled.

So what’s so different about this thing in front of me? It’s manual. A real life manual stick on the floor. Oh lordy lordy, this changes everything. It takes me right back to ye olde days when you actually had to drive a car. None of these fancy computers and driver aids, just you and the car. Mess it up and into the tree you go. It all came flooding back.

Clutch control is of utmost importance as release it too fast, with too many revs, and the back wheels are spinning. Put 20% turn on the steering wheel and let the clutch out and the rear end is whipping back and forth screaming ‘come on then pussy, control me’. What a blast. I might have pulled away from the Grand Hotel a tad too fast and they were relaying the paving bricks for the next three days. The earth actually moved.

They have fiddled with the facelift model a tad such as new LED headlights, more power from the lump (up to 444bhp now), improved suspension and new safety equipment - mainly driven by the poor safety score in the Euro NCAP tests. They have wisely not fiddled with the overall shape but we do have hood scoops, a new front splitter, all-new instruments and a 10-speed auto box.

The V8 is both hero and villain here. It sounds unutterably wonderful and goes like the clappers once you build the revs beyond 2,500rpm, but it’s a hefty donkey of an engine to have stuck out over the front wheels when you’ve got tight corners to deal with. It does not take well to our winding, twisting British roads and you need to constantly adjust to get it anywhere safely on our B roads. Power or precision - with the yanks you cannot have both.

The drive modes are normal, sport and drag - seriously, there is a drag strip mode that allows you to do a standing quarter mile with a timer. I didn’t do it of course - much!

The interior is average at best with a lot of plastic and shiny trim that l suspect in a few years will rattle around and wear terribly but at £37,000, you have to accept you get what you pay for. And what you are paying for is that glorious burbling V8 and a large dollop of redneck attitude.

There is a 2.3 Ecoboost engine but who the hell cares - can you imagine buying a Mustang with an Ecoboost engine. A bit like Heidi Klum’s head on Ena Sharples body. Just wrong.

And Ford will be getting a surprise from me as l actually request the next Mustang - the fire-breathing Bullitt model as a homage to Steve McQueen - yes please - in manual.

I really really like this car but in manual ONLY. A real blast from the past and a reminder of what driving used to be like - seat of your pants, fire breathing, screaming good fun. I miss those days.

What the new links between Gatwick and China mean for the region ...