READ NEXT
Advertise for the person, not the job 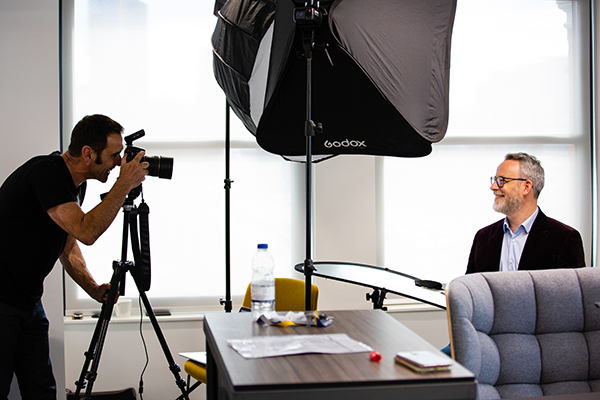 Were you formally trained in photography, or are you self-taught?
A bit of both. Although I didn’t study photography in higher education, I’ve been lucky enough over the years to have been mentored by some great professional photographers who specialise in my chosen field – portrait and headshot photography.

But I think, like most things, the most valuable lessons you can learn in photography are those that you learn on the job rather than in a classroom. And one of the most rewarding things about photography as a career is that you never stop learning, either in terms of developing your own style or keeping up with the changing technology.

Describe a typical day on set
I know it’s a bit of a cliché, but every day is different. One day I might be on location at a corporate client’s office, setting up the mobile studio to shoot team headshots for large volumes of staff, and the next I’ll just have couple of sessions with actors, where we’ll spend two or three hours in my studio and various locations outside to get a selection of looks for different castings.

What are the challenges of professional headshot photography?
I’m continually surprised by how self-deprecating people are when they’re having their photograph taken; regardless of what they do, how experienced they are in their field, or how outwardly confident they seem, one of the first things that most clients will tell me is what they don’t like about their appearance.

So the biggest challenge is invariably to make people feel comfortable enough to get a shot that they feel both represents not only the ‘real them’, but also a version of them that they really like!

How do you capture the right shot?
David Bailey once said that portrait photography is 90% conversation and 10% taking pictures and I think that’s the key. It can be a bit of challenge when you’ve got to photograph 50 people or more in a day as I often do for my corporate clients, but no matter how little time you have, it’s crucial to make your sitter feel as if you are completely engaged with them and genuinely interested in who they are as a person.

If you don’t establish some kind of authentic connection, you’re not going to capture the real person you’re photographing – and in headshot photography, authenticity is everything.

Have you photographed anyone famous?
Shortly after David Bowie died, a friend of mine put together a cancer fundraising tribute show, featuring some well-known names including Suggs, Sophie Ellis-Baxter and Jimmy Somerville, singing Bowie covers, all of whom I got to photograph. And like any self-respecting Brighton photographer I’ve got few snaps of Norman Cook on the decks at various local events.

But I’ve never had a household name in the studio as yet. Mind you, I suspect that might change sometime soon, as one of my favourite acting clients, Sharon Rose, has just landed the lead role of Eliza in Hamilton in the West End. I reckon she’s destined for great things.

Who would be your dream client?
As you can probably already guess, it would make an interesting change to have a client bound into the studio, full of confidence in the way they look, and unable to suppress their desire to have their photograph taken. But I suspect that might also be quite irritating.

I honestly can’t think of a single company or individual that I would rather photograph over all others, but if I could invent a job that I would give my right arm for (although that wouldn’t make much sense as a photographer) it would be in-house portrait photographer at the National Geographic.

What advice would you give to an aspiring photographer?
First and foremost: shoot, shoot and shoot some more. Even when you’re not working for money, get out there and shoot personal projects. Whilst I think it’s certainly true that some people have more of a natural eye than others, I also firmly believe that photography is a craft that can, like most things, be mastered with enough dedication and effort.

And secondly: specialise. There are a million and one photographers out there who do a bit of everything, but if you can get recognised for doing one thing, and doing it well, you’re most of the way there.

We hear you’ve started photographing dogs; who’s easier to work with, animals or humans?
On the plus side with dogs, I’ve yet to meet one who’s told me how much they hate having their photograph taken, or who has asked me to Photoshop out their double chin. As for humans, a cup of tea generally keeps them happy during a shoot, whereas dogs require a bewildering array of bones, biscuits and squeaky toys to keep them from wandering off.

To be perfectly honest, I’m equally happy photographing either, particularly as its given me the opportunity to have separate companies called Barking Mad and Shoot Me Now. I’m easily pleased.

Get in touch with David at www.shootmenow.co.uk