READ NEXT
Avoiding the nightmare before Christmas 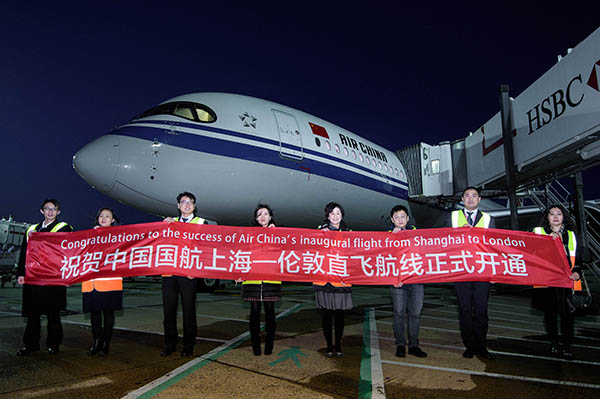 With eleven weekly flights, capacity to Shanghai from Gatwick is now growing faster than from any other airport in Europe.

The city airport is one of the world’s most important business destinations and the capacity increase at Gatwick reflects rocketing demand with trips abroad by Chinese visitors doubling in just six years. It also reflects Department for Transport predictions that China will become the world’s largest aviation market in just three years, by 2022.

Air China is the latest airline to fly to Shanghai from Gatwick and their four services a week compliment the service by China Eastern Airlines, which recently went daily. By negotiating these new routes, Gatwick is playing its part helping to make the UK a first-choice destination for these visitors, in the face of competition from other European destinations.

These new long-haul routes also help to support more trade for local and national businesses, as most cargo goes in the hold of passenger services and not in bespoke cargo planes.

China is the UK’s sixth largest export market and is the fourth largest source of imports. These fast, direct routes mean that the region is now better able to tap into a whole range of vital Chinese markets. They will also encourage investment by opening new business opportunities – in both directions – between China and the South East of England.

But it is not just about China. The region’s local airport now offers well over 60 long-haul routes to the US, Asia, the Middle East and high-growth global economies in South America. Gatwick continues to compete successfully with other airports to win new routes that, in turn, help the region to grow trade and investment with the UK’s key trading partners.

It is easy however to get carried away with glamorous destinations – and international trade and investment – and forget about what they mean for people living and working in the region.

Overseas visitors to the region who arrive via Gatwick spend around £1.2 billion a year and 9.7 million nights in the South East. This provides a significant boost to local hotels, visitor attractions, restaurants, shops and, crucially, this tourism supports over 22,000 local jobs.

More inbound visitors from China would be good news for the region too as UK expenditure from Chinese tourists last year was £759 million, up 35% on the previous year alone.  So the new Shanghai services are a great opportunity to grow the region’s share of this lucrative market and the new jobs it might support.

To help boost local visitor numbers, the airport is also working with local tourism partners through a body called the Gatwick Gateway to showcase the region’s unrivalled attractions to the rest of the world.

For example, Gatwick Gateway recently produced a series of new guides recommending where the international tourists who travel through Gatwick could visit, even if they have only a few hours to spare in the area. Jobs related to tourism are only part of the story, however. One in twelve of all jobs across the Gatwick Diamond area rely on the airport.

A range of programmes are in place to encourage continued job creation and to promote job opportunities for local people. The 1000 local jobs on offer at this winter’s Gatwick Jobs Fair may seem far removed from the airport’s exotic long-haul destinations, but many of these jobs exist because of the success of these important routes.

Whether it is local jobs supported by overseas tourists, by businesses securing international trade deals, or by firms that supply the aviation, retail, engineering and logistics industries that surround the airport – they all have one thing in common. They all depend on the airport’s continuing success.

A growing Gatwick means a thriving region and as the airport continues to be transformed – with new routes to China or other long-haul destinations – the ripple effect will be felt across all corners of the region.