READ NEXT
A Coronavirus Lone Snapshot 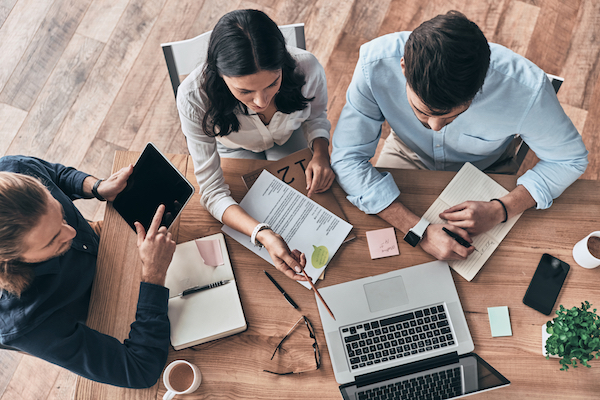 Latest UK regional PMI® data from NatWest highlighted a return to growth for the South East’s private sector, as easing lockdown restrictions released pent-up demand. The headline NatWest South East Business Activity Index – a seasonally adjusted index that measures the month-on-month change in the combined output of the region’s manufacturing and service sectors – rose sharply from 49.3 in June to post 56.7 in July signalling the first increase in private sector output for five months, with the rate of expansion the quickest since April 2017.

Adjusted for seasonal factors, the New Business Index posted above the 50.0 no change mark in July to signal the first increase in inflows of new work for five months. Panellists linked the expansion, which was moderate, to the release of pent-up demand amid looser lockdown restrictions.

Both sectors recorded an increase in new work during July, with growth slightly stronger at the South East’s good producers.

The 12-month outlook for activity among private sector firms in the South East improved further in July, with the level of positive sentiment the highest for almost two-and-a-half years. Anecdotal evidence linked confidence to improved demand conditions amid looser lockdown restrictions, alongside hopes of a swift economic recovery.

Output expectations also improved at the UK level in July, where confidence was the highest since February. Nonetheless, sentiment at the national level was lower than that in the South East. 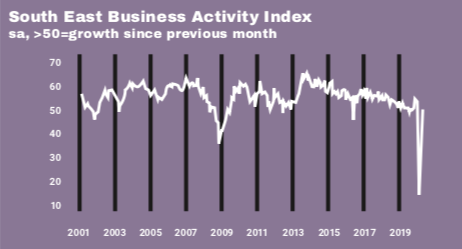 Private sector employment in the South East dropped in July, extending the current sequence of contraction to six months. Moreover, the decline in workforce numbers quickened from June and was marked overall, albeit not as severe as the unprecedented reductions seen in April and May. Panellists linked the latest round of job cuts to weak demand conditions amid the coronavirus pandemic, with firms frequently mentioning redundancies, layoffs and the non-replacement of leavers.

Staff numbers also declined at the UK level in July, with the rate of reduction outstripping that in the South East.

As has been the case in each of the past 22 months, the level of outstanding business at the South East’s private sector firms fell in July. The rate of backlog depletion eased slightly, but was solid overall. According to survey respondents, a lack of new work had allowed firms to direct remaining resources towards unfulfilled orders. Goods producers recorded a quicker reduction in backlogs than their service sector counterparts in July, although the rate of reduction eased across both sectors.

Private sector firms in the South East signalled a back-to-back increase in input prices during July, with inflation accelerating to a solid rate. Greater fuel costs, higher prices at suppliers, expenditure on personal protection equipment (PPE) and unfavourable exchange rates were all mentioned by respondents as drivers of input cost inflation.

At the sector level, the increase in cost burdens was broad-based and led by manufacturers.

Adjusted for seasonal factors, the Prices Charged Index posted above the 50.0 neutral mark in July and signalled an increase in average charges levied by private sector firms for the first time in five months. According to panellists, selling prices had risen to compensate for higher cost burdens. That said, the uptick was only mild overall.

Of the seven monitored regions to report an increase in selling prices in July, the rate of inflation in the South East was slower than only the East of England and the North West.