READ NEXT
Treading the line between success and failure 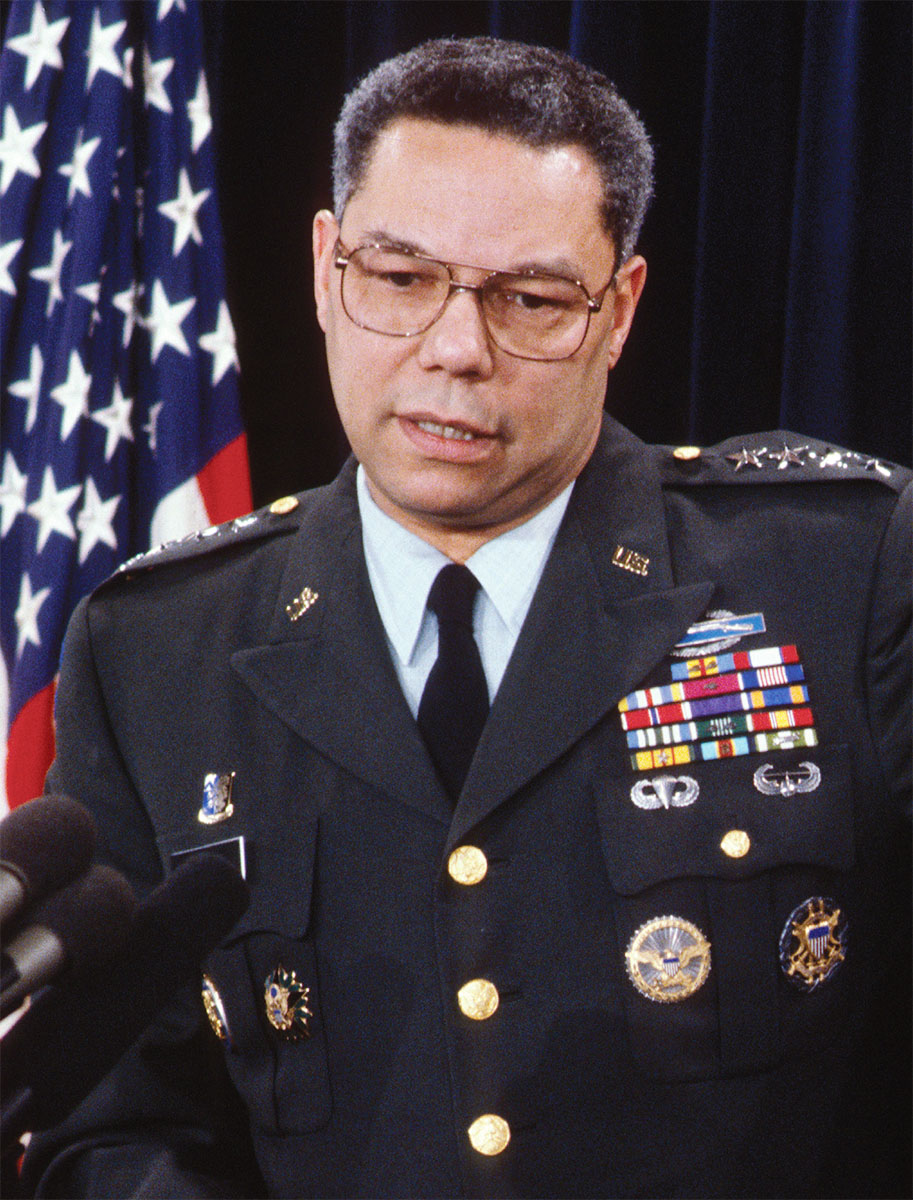 Maarten Hoffmann looks at the life of Colin Powell –former US Secretary of State, diplomat, statesman and four-star general – who passed away in October at the age of 84

A child of working-class Jamaican immigrants in the Bronx, Colin Powell rose from neighbourhood store clerk to warehouse floor-mopper to the highest echelons of the U.S. government. It was a trailblazing American dream journey that won him international acclaim and trust.

It was that credibility he put on the line in 2003 when, appearing before the United Nations as US Secretary of State, he made the case for war against Iraq. When it turned out that the intelligence he cited was faulty and the Iraq War became a bloody, chaotic nightmare, Powell’s stellar reputation was damaged.

Still, it wasn’t destroyed. After leaving government, he became an elder statesman on the global stage and the founder of an organisation aimed at helping young disadvantaged Americans. Republicans wanted him to run for president but after becoming disillusioned with his party, he ended up endorsing the last three Democratic presidential candidates, who welcomed his support.

For many Iraqis and others, Powell will forever be associated with that 2003 speech and the bloodshed that followed. But with Powell’s death from Covid complications at age 84, Republicans and Democrats remembered him as a historic figure, a groundbreaking soldier-turned-statesman, the first black secretary of state and first black chairman of the Joint Chiefs of Staff.

Powell rejected comparisons between himself and previous icons like George Marshall, the World War II general who became America’s top diplomat. But he embraced a local-kid-does-good narrative that reflected his humble roots.

He was fond of recalling his youth in the Bronx, working first as a clerk in a neighbourhood store and then as a sweeper in the massive Pepsi-Cola plant directly across the East River from the United Nations headquarters, a job he frequently referred to in meetings at the United Nations. A geology student at City College of New York, Powell made clear that he found his calling in the Reserve Officer Training Corps or ROTC, which would initiate his 35-year career in the Army.

Powell served two tours in Vietnam and rose through the ranks with various stints in Cold War-era Europe before President Ronald Reagan tapped him as his national security adviser. President George H.W. Bush then appointed him chairman of the Joint Chiefs of Staff, where he oversaw the ousting of Saddam Hussein’s Iraq from Kuwait in 1991. It was then that the “Powell Doctrine” emerged; it was a strategy for the use of American military power that relied on the deployment of overwhelming force and a clear and defined exit strategy from conflict.

Powell held the Joint Chiefs of Staff position into the Clinton administration, where he recalled arguments with Cabinet members over military intervention in the Balkans, which Powell believed was unwise.

“I thought I would have an aneurysm,” Powell wrote in a memoir about a White House incident in which then-U.S. Ambassador to the United Nations Madeleine Albright asked what good the armed forces are if they were never used. Powell ended up succeeding Albright as secretary of state in 2001.

And while his military career had taken him from the minefields of Vietnam to West Germany’s strategic Fulda Gap, it was his role as secretary of state in wartime that almost did him in.

Powell was the first of President George W. Bush’s Cabinet members to publicly blame Osama bin Laden for the September 11th terrorist attacks and the first of Bush’s top national security aides to visit Pakistan, just a month later, to make clear to the Pakistanis that they must join the U.S.-led coalition or be labelled an enemy.

Amid significant security concerns in the aftermath of 9/11, Powell flew to Islamabad, his plane blacked-out as it went into a corkscrew landing to avoid potential rocket strikes, to tell then-Pakistani President Pervez Musharraf that his support in the operation to avenge the attacks was non-negotiable. It worked, at least in the short-term.

Powell was personally skeptical of the 2003 Iraq invasion and cautioned against the war privately. But he dutifully presented the administration’s case for invasion not only in diplomatic meetings with his counterparts but also in the now-infamous speech before the U.N. Security Council in February 2003.

Confronted with widespread doubts about the accuracy of the American and British assessment of Saddam’s capabilities and intentions, many compared the stakes of Powell’s speech to be similar to those of former United Nations Ambassador Adlai Stevenson’s electrifying 1962 presentation to the council about the Soviet Union’s placement of missiles in Cuba.

In Powell’s speech — which he would later call a “blot” on his record — he brandished a vial that he said could have contained anthrax that intelligence agencies insisted Saddam was producing in mass quantities.

Some, including several critics of the Bush administration, believed Powell had hit the mark, but unlike Stevenson 41 years earlier, whatever convincing he accomplished was quickly erased. No anthrax or, in fact, any weapons of mass destruction were found in Iraq after the end of the war, which led to a protracted U.S. military occupation of the country that many believe resulted in a broader destabilisation of the Middle East, including the rise of the Islamic State, that persists to this day.

While he will always be associated with the Iraq War, Powell was not an unaccomplished diplomat. He oversaw the resolution of the Bush administration’s first foreign policy crisis, China’s force down of a Navy spy plane and the detention of its crew, and self-deprecatingly referred to successes in resolving a spat with Moscow over a Russian ban on U.S. chicken imports and an armed dispute between Morocco and Spain over a small Mediterranean island.

Powell was also critical in engineering an end to a standoff between Israel, and then-Palestinian leader, Yasser Arafat who had been blockaded in his Ramallah headquarters by Israeli troops during the second “intifada” or Palestinian uprising. And he was the first senior U.S. official to visit Afghanistan after the Taliban were ousted, flying into Kabul on a military plane in January 2002, to meet with then-President Hamid Karzai.

Nonetheless, Powell’s biggest legacy at the State Department may be bureaucratic rather than diplomatic. A natural tinkerer who loved to collect and repair old Volvos and was a fan of the then-new Chrysler PT Cruiser, Powell pushed to bring the department’s antiquated computer and communications systems into the age of email and interoperability. He fought budget battles to increase diplomatic spending and hiring and also led a successful drive to prevent the newly established Department of Homeland Security from entirely taking over the process of issuing visas, something that had been recommended in the wake of 9/11.

Unlike his predecessors and several successors as secretary of state, Powell was not enamoured of foreign travel and spent less time overseas than almost any of America’s top diplomats since the dawn of the jet age, an aversion perhaps exacerbated by his unsuccessful behind-the-scenes attempts in Washington to blunt his Bush administration colleagues’ push for war with Iraq.

Personable and often approachable, Powell sought to assure his new employees that he would not be a burden on them in some of his first remarks to the diplomatic corps.

“I will be around to see you in due course,” he told his first town hall meeting. “I am an easy visitor. We are going to try to make it very easy for me to visit. Just to save a lot of cable traffic, I have no food preferences, no drink preferences. A cheeseburger will be fine. I like Holiday Inns, I have no illusions.”

91 Treading the line between success and failure

Students should fail occasionally and succeed often. One of the great challenges of building a productive and inspiring classroom environment...

91 Tigers on the hunt in Brighton

The Sussex Business Show, part of Network Xpress, is not a standardised B2B Trade-show events company. Its founder, Sonny Cutting,...

How does Gatwick and the UK aviation sector plan to support UK climate change targets?  Sustainability is one of the most important...