How a former comic, satirist and TV producer came to unite the world in condemnation

READ NEXT
Interview with Grant Bourhill 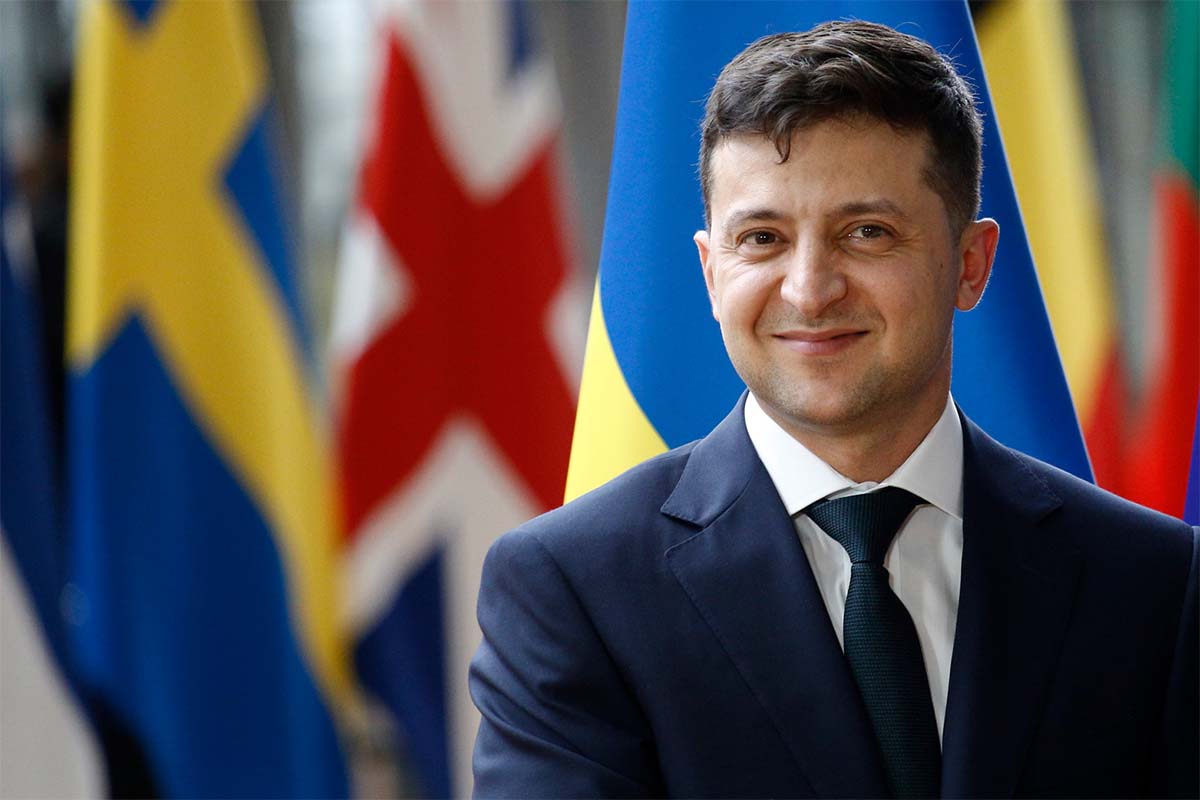 Imagine a scenario where a former comic, voice-over artist, director of a TV production company, born into a religion with a history of being persecuted in his own country for centuries can be elected leader in a landslide, unite his country, and garner support from most of the world, all in the name of freedom and self-determination. Throw in two former heavyweight boxing champion brothers; one of whom is now the Mayor of that country’s capital city, and the other who has joined his country’s reserve units, all thanks to one Russian leader with his head stuck in the Cold War.

Certainly Hollywood’s lame ‘three-ideas and that’s it’ script-writers would have a meltdown.

To all those observing eastern European politics, Russia’s invasion of Ukraine was no surprise. The Russian President had been warning of it for a decade or so, aided and abetted – in what during Cold War times would have been considered a long-term brilliant subversion programme by Moscow, worthy of Markus Wolf himself – by winning over Establishment elements, especially in London.

By way of punishment, the EU and the US – two of the biggest trading blocs in the world – sanctioned a number of Russian oligarchs; primarily those close to the Moscow-based kleptocratic regime. The UK eventually dragged itself into sanctioning a handful – the Chelsea FC owner Roman Abramovich being
the highest profile case – of Russian billionaires.

The lists of sanctioned Russians – which includes 386 Duma members (Russia’s MPs) – overlap between the EU, US and the UK, but are by no means consistent. The ties between Russia and far too many members of the British political Establishment has led to an influence and interference from Moscow hitherto never seen before in the Westminster corridors of power. The Cambridge Five were mere gophers compared to those Moscow now has influence over within the Palace of Westminster.

The plight of fleeing Ukrainian civilians has been harrowing for Europe. It has been partially eased by every country in the EU waiving its visa insistence on Ukrainians families and individuals. Sadly, the UK is not playing along. It is now the only country in western Europe to insist on visas for Ukrainian refugees. 3.6 million people have left Ukraine, with the UK taking in a paltry 12,400 (or 0.3%). The UK government cites ‘security issues’ believing Russia will plant spies among the women and children; oddly, something no-one else has done by way of excusing your moral obligations.

A deliberately farcical visa application system for those UK households - under the Government’s Ukraine Sponsorship Scheme – who wish to house Ukrainian families hasn’t helped. For a long time after its online-only launch, it was only in English (not Ukrainian nor Russian), and there have been many accusations of excessive red tape. Many households are abandoning the scheme, and so far, only 10% of the visas for those trying settle under the Ukraine Sponsorship Scheme have been issued.

JEWISH COMIC TURNED LEADER
But what of the Ukrainian leader, Volodymyr Oleksandrovych Zelenskyy? He was born into a Jewish family on January 25th 1978 in the Ukrainian city of Kryvyi Rih, a conurbation of around 680,000 in 2022. Zelenskyy’s grandfather rose to the rank of colonel in the Red Army during World War II, while his grandfather’s brothers and father all died during the Holocaust

The eastern Slavic naming convention is that a man is given his own first name, plus he takes the father’s name, with ‘ovych’/‘ovich’ – literally ‘son of’ – at the end as a patronymic. In this instance, Volodymyr’s father was called Oleksandr. Meanwhile, although the family name is Zelenskyy, for women, an ‘a’ is applied at the end of the female surname. So the female family name is Zelenska.

In the late 1970s, Ukraine was part of the USSR, and did not achieve independence until 1991.

In 1995, at the age of 17, Zelenskyy entered a team into the Russian-language TV humour programme KVN (Klub Vesyólykh i Nakhódchivykh, or ‘Club of the Funny and Inventive’). This highly-successful programme ran from 1961 to 1972, and again from 1986 to the present day.

Starting in the local heats, he was invited to join the Ukrainian national team, which eventually won the competition in 1997. That same year, he created and headed the Kvartal 95 team which later transformed into the production company Kvartal 95. In 2003, Kvartal 95, produced its first TV programme, and by 2008 was releasing major Russian language rom-coms and feature-length films. Over the next decade, Zelenskyy’s production company became a major force in Russian-speaking Ukrainian TV and films.

In 2014 and 2017, he dubbed the Ukrainian voice of Paddington Bear in the two eponymous films. (Ben Whishaw for UK PM, anyone?)

In March 2018, members of Zelenskyy’s production company registered a new political party called ‘Servant of the People’ – named after the satirical programme that Zelenskyy had starred in, where he played a teacher who was elected President of Ukraine after a viral video showed him ranting at corruption in Ukraine.

When entering politics, and even following his emphatic victory in the 2019 Ukrainian Presidential Elections, he was saddled with issues on his country’s borders. Russia had already illegally annexed the Crimean peninsula in the south of Ukraine, and was making petulant noises and in-roads on some of Ukraine’s eastern territories.

To try and explain the history and politics behind Russia’s behaviour would take forever. Suffice it to say, the Russian invasion of Ukraine, despite its promise in 1991 to recognise its sovereign independence has little basis in reality. Among the Russian President’s main justifications – in a bold nod to a total lack of self-awareness - is to rid Ukraine of the ‘nazification’ of the country’s governing figures, and to protect persecuted Russian speakers in Ukraine.

The tragic irony – not to mention the appalling gibberish – of this notion is not lost on anyone. In marked contrast to his Moscow counterpart, Volodymyr Zelenskyy has, through sheer force of personality, managed to unite most of the rest of the world behind Ukraine’s cause.

It’s difficult to think of many world figures through history who have garnered so much international support in the face of hostile conflict. In the majority of armed conflicts through history, countries have sided with their friends, their ideological allies, their cultural cousins or even just their main trading partner.

Given the relative ignorance of the Russo-Ukrainian history in the West, it’s astonishing just how quickly the vast majority of the world (except the Internet Karens, of course) has come down on one side. Or rather, come down against one side.

Appealing to nations individually across the world for support, Zelenskyy has addressed many First World govern-ments citing important historical references (on speaking via Zoom to the UK Parliament, he paraphrased Churchill and Shakespeare).

But the most obvious issue whereby Zelenskyy has gained most praise, is in his patriotic stoicism in promising to defend the country, the capital and its people from Russian aggression. He was offered an airbridge out of Kyiv by the United States, but refused, and insisted on standing shoulder to shoulder with his fellow Ukrainians.

It’s the kind of narrative and spirit which endears him to western culture.

In seeking to win the PR war with the rest of the world, Zelenskyy is helped by two more Ukrainian heroes.

Vitali and Wladimir Klitschko, brothers born in what is now Kyrgystan and Kazakhstan respectively, are sons of a former Soviet Air Force major general, and an attaché for Ukraine in East Germany. Both sons have taken on
their family’s home state to assist – and been seen to assist – in the defence its capital city.

In February, at the age of 45, former world boxing champion Wladimir joined the Kyiv Territorial Defence Brigade (a military reserve component of the Ukrainian armed forces). Both he and his brother Vitali, also a former world champion, and now aged 50, has been the Mayor of Kyiv since 2014, pledged to fight to protect the city.

PEOPLE WHO HAVE UNITED THE WORLD

People who have united the world in public support are rare; extremely few and far between. The likes of Mohandas Gandhi, Abraham Lincoln, Dr Martin Luther King Jr, and even Sir Winston Churchill never gained universal praise in their lifetime, whether politically, ideologically, or culturally. They all had too many opponents working against them. It is only after their death that the appreciation surfaces and, in some cases, narratives re-written.

NELSON MANDELA
The ultimate ‘one man’s freedom fighter is another man’s terrorist’. South Africa’s despised apartheid system, in place since 1948, was what had kept Nelson Mandela in prison for 27 years. Through his campaigning while locked up on Robben Island, and his subsequent release brought worldwide acclamation. More astonishingly still, while certain cultures might have suggested he was within his moral rights to exact retribution, he instead founded the Truth & Reconciliation Committee in a noble attempt to draw a line under South Africa’s recent past.

MALALA YOUSAFAZI
The Pakistani schoolgirl who was shot by the Taliban for campaigning for women to attend school. The attempt on her life sparked an international outpouring of support for her. Weeks after the attempted murder, a group of 50 leading Muslim clerics in Pakistan issued a fatwa against those who tried to kill her. Tehrik-i-Taliban Pakistan were internationally denounced by governments, human rights organisations and feminist groups.

BOB GELDOF
Bear with me here. For a short time, the mid-talented Irish motormouth was seen as the saviour of Ethiopia, embarrassing and bullying government after government, organisation after organisation into helping the victims of the east African famine. Through sheer force of personality and a diplomacy not generally seen
in Establishment quarters, the whole world – East and West – came together for one day to raise awareness and money for famine relief. Not many people could have done that, and only one person did.

Now consider the images of the Russian President - sitting alone at the end of a 30-foot table - placed in lonely opulence, an unthinking, uncaring man who is still fighting mythical historical battles from 40 years ago without wishing to move on. If ever there was a metaphor for Russia’s isolation on the world stage…

RUSSIAN AEROFLOP?
The Russian President’s plan may not be going completely as he wished. His catastrophic error of believing Ukrainians are his brothers (brothers to be bullied, but ‘brothers’ nonetheless) who need protection from Nazism by the Russian state, thereby thinking his troops would be welcomed in, may well be his undoing. The Russian army going in under-funded with ill-maintained equipment isn’t helping their cause.

What can almost certainly not happen in the future without continuing internal strife is a Russian occupation, nor even a puppet leader put in place by Moscow to satisfy the President’s lust for glory. The Ukrainians, themselves proud within their own force of nationalism, won’t stand for it. Guerilla warfare and insurgencies would be the norm, and no pro-Russian would ever be considered safe from retribution.

However, this is the Russian army; an army which NATO is admittedly looking to re-evaluate due to its apparent inefficiency.

But in the final analysis, Zelenskyy may well have to trade peace for land. It’s what that peace deal eventually looks like that will determine his own fate. The Russian President on the other hand, not one noted for listening to facts, advice and expertise (doesn’t that sound familiar?) may well weaken his hand all the while his troops fail in their objective.

But one thing is certain - the way the rest of the world is near-universally united in condemnation of Russia, and that is something Zelenskyy must hope lasts.