Aside from the mysticism of its extreme environments, Namibia attracts visitors thanks to the richness of its wildlife.

READ NEXT
Airpods and flying cars 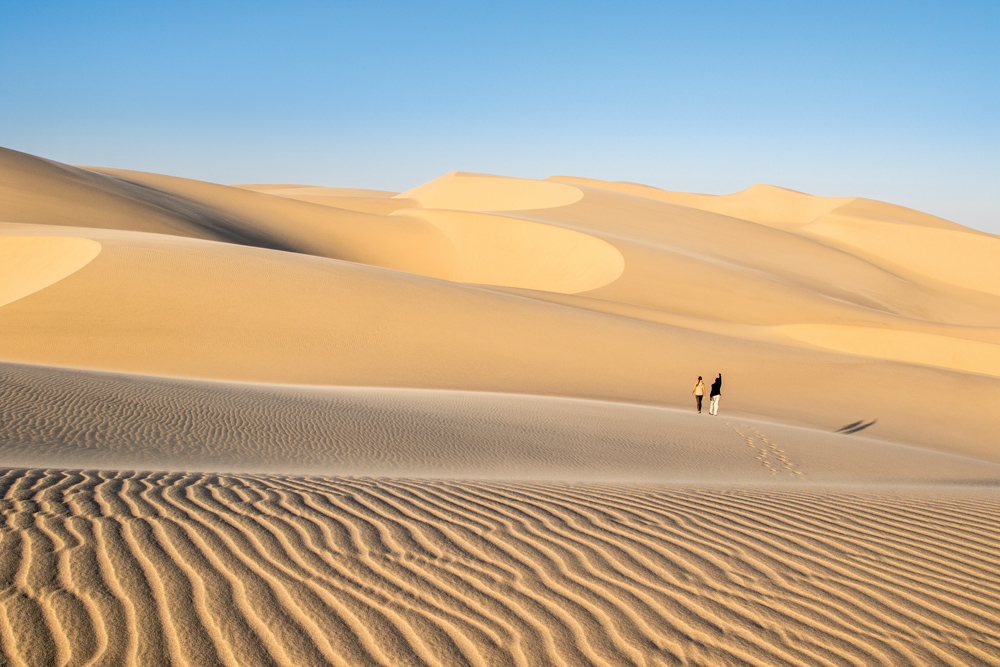 Namibia has been calling out to adventurous types for centuries.
The haunting shipwrecks along the aptly named Skeleton Coast is a testament to this – Portuguese sailors nicknamed this region “the Gates of Hell” due to the thick fog shrouding the coastline. The nation is home to the world’s oldest, driest desert, Namib, which often goes years without rain, and is an irresistible draw for intrepid souls. Travellers are lured to Sossusvlei, a salt and clay pan surrounded by towering ruby-coloured dunes, neighboured by Deadvlei, where dead camel thorn trees sprout from white clay pan terrain – it would look like Mars if it weren’t for the belt of azure sky above it.

Aside from the mysticism of its extreme environments, Namibia attracts visitors thanks to the richness of its wildlife. It’s where you’ll find the largest population of black rhino (almost half of the 5,000 or so left on the planet). And sites like Etosha National Park – to the northwest of the country – exemplify why Namibia is touted as one of Africa’s greatest conservation successes. Compared to other safari destinations, where visitors can drive for hours without seeing a single creature, Etosha is said to offer one of the most consistent wildlife-spotting experiences there is. Elephants, zebras, giraffe, wildebeest and antelope are everywhere, while dawn and dusk are the best times for spotting rhino, lions, cheetahs and leopards. The best time of year to visit Namibia for a safari is  between approximately May and October, encompassing the winter months, which are drier, causing animals to gather en masse around watering holes.

Some exciting design-led resorts are popping up in Namibia right now. This summer saw the launch of Shipwreck Lodge, the first accommodation built on the dunes of Skeleton Coast. The resort’s 12 cabins (two of them for families) are designed to look like sunken ships upon the sand, and come with decks and outdoor tubs. From here, it’s possible to take day excursions to see Mowe Bay seal colony, or to drive to shipwrecks and explore their eerie remains.

In addition, one of the most remote desert camps in Southern Africa is set to open in Namibia this month following a rebuild. Set along the banks of the Kunene River in the desolate Hartmann’s Valley, Serra Cafema resort’s new design incorporates the natural beauty of the surrounding desertscape, while emulating the structure of a typical village of the region’s Himba people, and is also now 100% solar-powered.

Connected by walkways, the camp’s eight guest rooms feature canopy beds and both indoor and outdoor showers (there is one family room). Meanwhile, an oval-shaped seated area at the heart of Serra Cafema is perfect for socialising and gazing at stars as they burn bright against the impossibly dark sky.