For corporate travellers, perhaps the most relevant part of Qatar’s $200 billion World Cup plans will be the influx of new hotels that will materialise in Doha by 2022

READ NEXT
Why winning an award matters 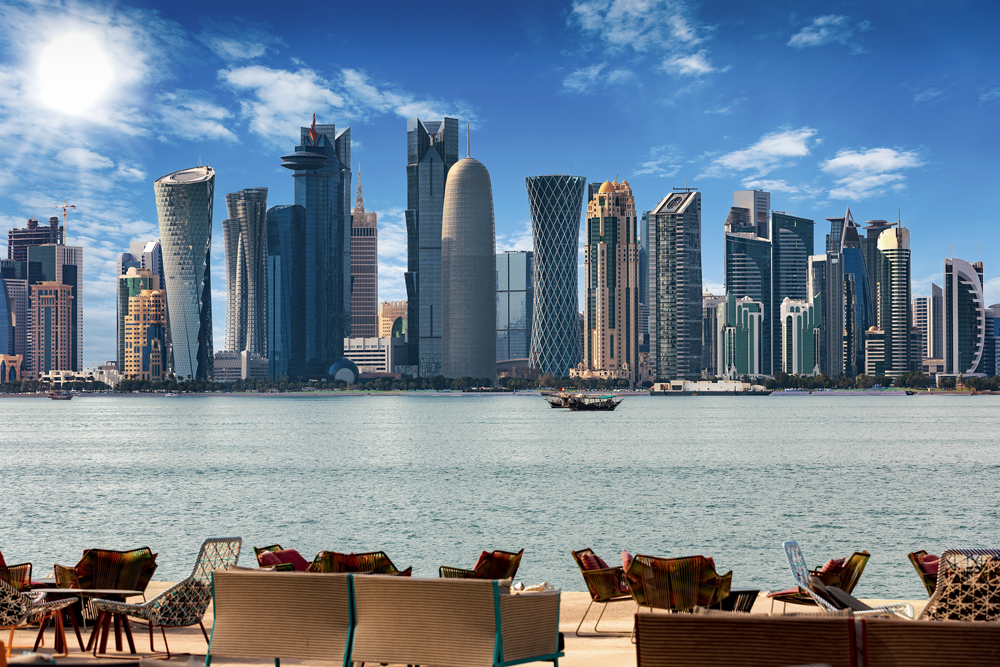 in the piercing sunlight. The Qatari capital’s palm-lined promenade hugs the peaceful blue waters of Doha Bay, where traditional wooden dhow boats cast delicate silhouettes against the skyscrapers that appear through the haze. Like a collection of ornaments lined up on a shelf, the buildings’ glaring idiosyncrasies somehow making them complete each other together.

In just over four years’ time, this laid-back walkway will be teeming with football fans from all over the world. It’s inevitable that when an international sporting event ends, we turn our attention to the next host destination and assess “how ready” they are. And, with the controversy surrounding Qatar’s winning bid for the 2022 World Cup, it’s unsurprising that people are eyeing the nation with extra scrutiny.

For the first time, the dates of the World Cup will be moved to the months of November and December to counteract Qatar’s blistering summer temperatures. The working conditions for the migrant task force behind Qatar’s staggering architecture is troubling to the international community. And the cultural clashes between a nation where drinking alcohol is forbidden (apart from in licensed restaurants and bars) surely won’t sit well with the celebratory crowds that have gathered in the public spaces of any World Cup host thus far.

At the same time this unprecedented situation makes for interesting viewing from the outside, as we see how Qatar approaches each of these challenges. It’s times like this where paradigms are challenged and innovation can potentially come to the fore. And, for international conferences and events, we should see some cutting-edge infrastructure emerge for welcoming delegates to the centre of the world.

For example, Qatar maintains its intention to become the first-ever carbon neutral World Cup. One of the steps in this so far is the groundbreaking air conditioning of 40,000-seat Khalifa Stadium, which was launched last year. Using technology that is 40% more sustainable than existing cooling systems – co-designed by engineers from the University of Sheffield – Khalifa’s air conditioning keeps temperature on the pitch and in the spectator areas at 20 and 23 degrees Celsius, respectively, while outside the stadium, the temperature is 37 degrees. After 2022, we should see corporate hospitality packages and hire options emerge at the emirate’s eight planned World Cup stadiums, complete with their up-to-the-minute facilities.

For corporate travellers, perhaps the most relevant part of Qatar’s $200 billion World Cup plans will be the influx of new hotels that will materialise in Doha by 2022. Although its luxury sector is already well-served, it seems the vast majority of the city’s planned new hotels will be four or five-star (great news for event planners, not so much for football fans on a budget, who may be relegated to desert camps and cruise ships according to some reports…) Between 2013 and 2017, the number of hotel rooms in Qatar increased by 64%, and there are no signs of this slowing pre-2022. In order to keep up occupancy rates after the World Cup, Qatar hopes to bolster its tourism sector, which is steadily growing, despite its long-standing reputation as a business destination.

The rapid expansion of Qatar’s national carrier has played a large part in this. Named the world’s best airline in 2017, Qatar Airways connects to more than 150 destinations from its Doha hub. And, in May, the carrier began flying to London Gatwick again for the first time in seven years. The twice-daily flights from Gatwick to Doha enable passengers in Southeast England to fly onward from Doha to cities in Asia and Australia, including Bangkok, Colombo and Perth.

Corporate travellers can also benefit from another recent innovation from Qatar’s legacy airline. In April, Qatar Airways became one of the first airlines to offer suites in business class. Each of the carrier’s A350-900 aircraft has six QSuite “quads” – groupings of four seats – two facing backwards and two directed forwards. Dividers slide open to connect each quad, so four passengers can dine, relax and even have a business meeting together.

All in all, the next four years will see a nation the size of Yorkshire bend over backwards to host a global event. It’s a mammoth challenge, but one that will transform the face of the emirate forever – and hopefully leave it with facilities that will lure international conferences there long after the final whistle in 2022.

Open since 2015, this shimmering venue in the heart of Doha’s financial district has five exhibition halls totalling 29,000 sqm of event space. decc.qa

Last year, the opening of Mondrian Doha caused quite a stir thanks to its gaudy, maximalist interiors designed by Marcel Wanders. Its show-stopping 2,000 sqm ballroom has a 24-karat lift that connects directly to one of the hotel’s suites. morganshotelgroup.com

This pyramid-shaped five-star property was the first hotel to open in the Qatari capital in 1979. Set along West Bay, it has almost 8,000 sqm of event space. sheratongranddoha.com

As well as an Olympic-sized swimming pool and two Gordon Ramsay restaurants, this luxury hotel has the largest ballroom in Doha that has natural light (it can hold 1500 people for a reception). stregisdoha.com