Calls for Bercow’s dismissal are not a new phenomenon. He’s heard it all before...

READ NEXT
The world of NIMBYs 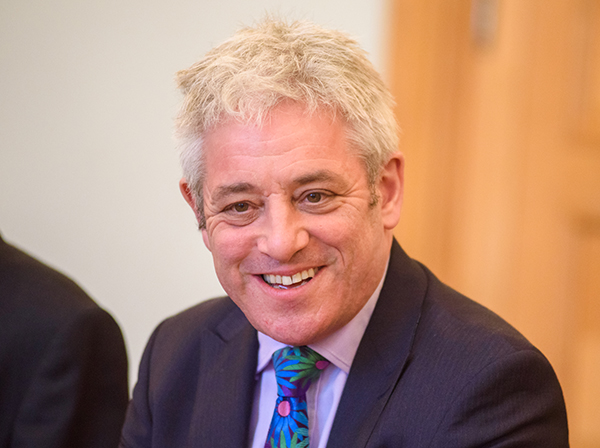 Whatever you may think of the unfeasibly posh Jacob Rees-Mogg, no-one can dispute his in-depth knowledge of the constitution and the workings of Parliament. So it was praise indeed when Rees-Mogg gave his seal of approval to the Speaker of the House of Commons, John Bercow. “His good qualities hugely outweigh his bad qualities”, declared Rees-Mogg, “I’m very much a supporter because he stands up for the Legislature against the Executive.”

Or in laymen’s terms, Bercow stands up for the will of Parliament even if at odds with the position of the Government  - Parliament makes and amends the rules (the Legislature) and the Government enforces and enacts them (the Executive).

It should be noted that Rees-Mogg expressed this view long before the Brexit referendum, and is unlikely to declare such support any more, even though Bercow’s defence of the legislature is more pronounced than ever.Rees-Mogg is not the only Brexit supporter to fall out of love with Bercow. When Prime Minister David Cameron was trying in vain to quell the noisy backbenchers demanding a Euro referendum, he was frustrated by the unshakeable speaker, who determined their voices should be heard.

Back in 2017, commentator Helen Lewis wrote in the New Statesman: “Bercow has a surprising number of backers among the Tory Awkward Squad, who recognise that he gave them room to talk about Brexit when David Cameron would have cheerfully squashed the issue. He allowed a third amendment on the Queen’s Speech in 2013, instead of the traditional two: John Baron’s cross-party motion regretting the absence of a EU referendum bill. This put more pressure on the government and contributed to Cameron’s decision to promise a referendum in his 2015 manifesto.”

But that was then. Now Brexit-backing MPs don’t even attempt to disguise their contempt of the speaker they believe is deliberately sabotaging the UK’s exit from Europe. His Remain credentials aren’t exactly a secret. After a speech to students at Reading University, he revealed he voted to remain.

And then there was the infamous car sticker. The right-wing political blogger Guido Fawkes published a photo of a car in the Speaker’s car parking space with a ‘Bollocks to Brexit’ car sticker. Bercow tried to sidestep the issue, dismissing it as the property of his wife Sally, who was entitled to her views as she was ‘not the chattel of her husband’.

The fury intensified in January of this year, when Theresa May was trying to get her Brexit deal through Parliament, and John Bercow allowed a vote on an amendment proposed by arch-remainer and Tory MP Dominic Grieve. Grieve won his vote, which resulted in a series of votes on all possibilities including a “Norway option” or second referendum (all of which failed). Brexiteers believed that Bercow broke with precedents by allowing the vote to even take place. Reigate MP Crispin Blunt expressed the views succinctly when he declared the uncomfortable conclusion on the Tory benches was “an unshakeable conviction that the referee of our affairs is no longer neutral.”

Andrea Leadsom launched her Conservative leadership campaign by brandishing a placard with the simple message: “Bollocks to Bercow”.

Bercow out!
Calls for Bercow’s dismissal are not a new phenomenon. He’s heard it all before. In 2015, the final action of William Hague as Leader of the House, backed by his Chief Whip Michael Gove, was to instigate a vote to change the way the speaker is selected. He believed that if the speaker was elected by a secret ballot, he could oust Bercow. The motion was defeated, with the support of Bercow’s future enemies.

Again Jacob Rees-Mogg spoke in Bercow’s favour, saying he was deeply saddened that Hague “had put his name to a bit of parliamentary jiggery-pokery that has come about from some grudges that people bear to the Speaker”.

David Davis opposed the motion as: “This is a constitutional matter of some importance since it goes to the heart of the relationship between executive and parliament.”

Last year, he faced accusations of bullying and intimidating his former private secretaries Angus Sinclair and Kate Emms. An inquiry into the bullying allegations was blocked by the Commons standards committee.

Sinclair claimed Bercow had undermined him in front of other staff, shouted, swore and attempted to physically intimidate him.

His successor, Emms reported Bercow frequently shouted at her, and she was subsequently diagnosed with post-traumatic stress disorder.

The claims were disputed by The House of Commons’ sergeant at arms Kamal El-Hajji. He told the House Magazine that allegations of bullying against Bercow were part of a witch-hunt by ‘disgruntled staff members’ who want to oust him. El-Hajji also that said he had been the victim of racism in the Commons and had relied on Bercow’s support.

Bercow denied all claims and soon after presided in his typical outspoken manner on a commons debate – on bullying.

Boris, Brexit and the battle ahead
If, as seems likely, Boris Johnson becomes PM, a constitutional battle is imminent as he is adamant that, whatever happens, the UK will leave the EU on October 31st.

The problems of getting a deal (or no deal) through Parliament have been well documented - cue a battle of wills to be fought out by Boris and Bercow.

Johnson could pursue a policy of proroguing - i.e. discontinuing a session of Parliament without dissolving it to deliver Brexit. Hannah White from the Institute of Government sees this as undemocratic: “Proroguing Parliament may seem like the easiest way for a prime minister to prevent Parliament from attempting to ‘interfere’ with their plan. But it would be undemocratic to prevent the normal operation of our key representative democratic institution simply because it might take an unwelcome decision.”

Proroguing may also mean requesting an intervention from the Queen, which would seem highly unlikely.

If Parliament can’t be overruled, what then?
One thing is for sure - Bercow will fight tooth and nail to preserve the power of Parliament.

But what is Bercow’s motive? Will he fight the Government to ensure he gets his preferred outcome, ie no Brexit? Even though he is a believer of remain, I don’t believe this is his motive. The clues lie in the nature of his personality.

The Bercow Way
The Brexit car sticker and his obdurate frustration of the Government’s wishes, would suggest he is a Remainer warrior, but he is actually something entirely different.

He is just unbearably awkward. He is the ultimate jobsworth, who leaves everyone around him fuming in impotent rage. He is the nightclub bouncer refusing entrance to a club, the steward at a football match or concert telling people to sit down, the pedantic health and safety officer, the traffic warden issuing a ticket a minute after the parking time expires - all rolled into one.  And he has the best job in the world - a role where he can happily search out ancient precedents and the most obscure laws to administer.

Back in 2014, when most Conservatives still respected Bercow (who was after all a Tory MP), Andrew Gimson at www.conservativehome.com wrote an entertaining and revealing profile of Bercow.

Gimson wrote: “At Finchley Manorhill, his north London comprehensive school, Bercow became the most unpopular boy in his year. He was plainly very clever, but he wasn’t clever about the way he handled being clever. He often flaunted his superior ability. Perhaps trying to compensate for his size, Bercow would often try to humiliate bigger kids in his class. One in particular used to make mistakes with his reading and Bercow would write them down and recite them back to him. Incidents like these would certainly have contributed to the view that Bercow was ‘an odious little toad’.

“The young Bercow was the best under 12 tennis player in Middlesex, but got left behind when his opponents grew and he didn’t. His other passion was politics: his local MP was Margaret Thatcher and he delighted in defending her policies to hostile audiences. He joined not only the Young Conservatives but the Monday Club, where very soon he was promoting the voluntary repatriation of immigrants. His admiration for Enoch Powell was unbounded. He began life with no influential connections, and with a thin skin which perhaps accounts for most of his rudeness, but with the energy, ambition and ability to go a long way.”

Bercow apparently likes to refer to himself as “the Jewboy son of a taxi driver”, and he delighted in making digs at the upper class privileges of his colleagues. His tennis partner David Cameron was on the receiving end of Bercow’s caustic tongue: “In the modern world the combination of Eton, hunting, shooting and lunch at White’s is not helpful when you are trying to appeal to millions of ordinary people.”

When campaigning to become speaker, he declared: “For far too long the House of Commons has been run as little more than a private club by and for gentleman amateurs.”

In his first stint as a backbench MP he made more speeches in the House than any other politician, and was also one of the most consistent hecklers, usually laced with spectacular rudeness.

It was perhaps his outspoken ways and the fact he was such a stickler for convention that saw him ushered in as a speaker. His predecessor, Michael Martin, was viewed as ineffective and lacking authority - culminating in the damaging expenses scandal which occurred under his watch. Bercow appealed as he takes no prisoners.

As a speaker he has been strict and officious, and happy to take the big egos down a peg or two, including the serving Prime Minister. More power has just meant he can get away with more, and his barbed insults have never relented.

He admonished Michael Gove:  “Mr Gove! You really are a rather over-excited individual! You need to write out 1,000 times ‘I will behave myself at Prime Minister’s Questions’.”

When Jeremy Hunt paid too much attention to his phone, Bercow told him off like  naughty schoolboy: “Fiddling ostentatiously with an electronic device defies the established convention of the House that such devices should be used without impairing parliamentary decorum. They are impairing parliamentary decorum. It’s a point so blindingly obvious that only an extraordinarily clever and sophisticated person could fail to grasp it.”

Not that Bercow would care. Andrew Gimson hailed “Bercow’s willingness to fight his own corner, indeed his inability not to fight it.” And he noted Bercow is a “gifted outsider with a phenomenal memory, who could recall the name and birthday of everyone in the House.”

With his photographic memory, love of conflict, and obsession with rules, he is a formidable speaker. But when the Government (whether Hunt or Johnson) is so patently at odds with Parliament, a formidable speaker is a palpable obstacle to the execution of Brexit.Undoubtedly, Bercow will defend the legislature against the executive with all his powers, no matter what chaos it might cause for the rest of the country.