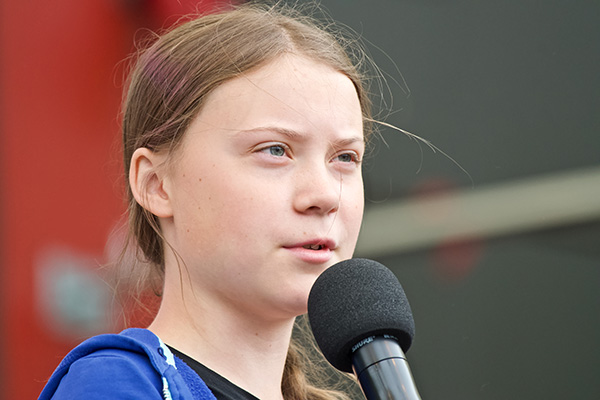 The anger was palpable and the frustration was etched on her face. When 16-year-old eco-activist Greta Thunberg stood up to address September’s 2019 UN Climate Action Summit in New York, she let rip:

”This is all wrong. I shouldn’t be standing here. I should be back in school on the other side of the ocean. Yet you all come to me for hope? How dare you! You have stolen my dreams and my childhood with your empty words. And yet I’m one of the lucky ones. People are suffering. People are dying. Entire ecosystems are collapsing. We are in the beginning of a mass extinction. And all you can talk about is money and fairytales of eternal economic growth. How dare you!”

It was a passionate call to action to protect our planet. Glaciers are melting, sea-levels are rising, rain forests are being flattened and species are threatened with extinction. Seeing the lack of action from world leaders, Greta was angry.

The anger apparently delighted many of her critics, who seem to be largely male and middle-aged (or older). It’s not easy to attack a sweet-natured child, but a stroppy and emotionally charged teenager is a much easier target. The resulting snipes aimed at Greta were ugly and disturbing, and seemed to be fuelled by more than a disagreement with her views on climate change.

Greta Thunberg became famous for taking a stand at such a young age and she has inspired a generation to take direct action, either through school strikes or high-profile demonstrations. But her stand has exposed more than a lack of determination to tackle environmental dangers. She has laid bare the raw misogyny and bullying among much of the established media and the political class, and shone a light on a chasm dividing the generations.

Inevitably, the usual suspects included Donald Trump and Vladimir Putin, alongside the ever-present ranters brigade with signed-up members such as Rod Liddle and Toby Young. They are, of course, perfectly within their rights to dispute Greta’s arguments, but the nature of the jibes was often disturbing. Perhaps it is because I have a daughter who is the same age as Greta, but I can’t help but find the bullying and ridicule of a teenage girl by intelligent grown men as nauseating. What is it about Greta Thunberg that unsettles men of a certain age so much?

Greta Thunberg’s concentrated determination
It has been well-documented that Greta is on the autistic spectrum, which has been a major factor in why her campaign has been so focused and determined.

“When I was nine people were always talking about how we should turn off lights, save water, not throw out food. I asked why and they explained about climate change. And I thought this was very strange. If humans could really change the climate, everyone would be talking about it and people wouldn’t be talking about anything else. But this wasn’t happening.”

Noting Greta’s highly developed ability to stay highly concentrated on a single subject, Gressen writes, “She began researching climate change at nine and has stayed on the topic ever since. She has stopped eating meat and buying anything that is not absolutely necessary. In 2015, she stopped flying on airplanes, and a year later, her mother followed suit, giving up an international performing career. The family has installed solar batteries and has started growing their own vegetables on an allotment outside the city.” 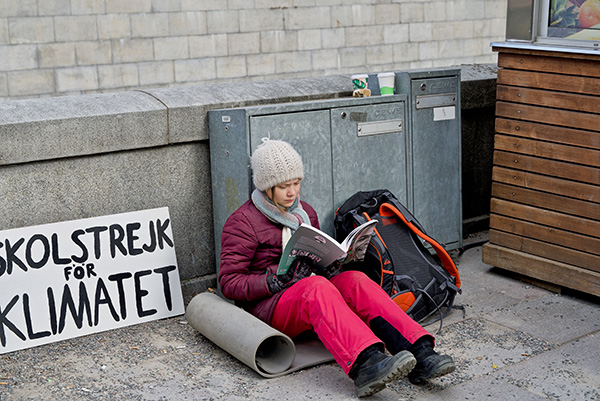 Noting the way Greta has taken Sweden to task on its environmental policies (even though Sweden is one of the greenest nations in the world), Gessen concludes: “Thunberg’s is a voice of unaccommodating clarity that reminds me of Soviet-era dissidents. I suspect that some of them were also on the spectrum, which in their case meant acting irrationally in the framework of the Soviet system—risking their lives to make the doomed demand that the country act in accordance with its written laws and declared ideals. Thunberg smiled in recognition when I told her this. ‘I can become very angry when I see things that are wrong,’ she said.”

The New Statesman’s India Bourke also reported on how autism makes the issue painfully serious for Greta, writing, “At the age of 11, she fell into depression, stopped talking and eating, and lost ten kilos in weight. In a TEDx talk last year, Thunberg attributed her despair to the lack of attention the existential threat of climate change received from politicians and the media.

“… Thunberg has been diagnosed with Asperger syndrome, obsessive-compulsive disorder and selective mutism, meaning she only speaks when she feels compelled to do so. But Thunberg views the condition as a gift. ‘We aren’t very good at lying and we don’t normally enjoy participating in the social game that the rest of you seem so fond of,’ she drily quipped in her TEDx talk.

“The teenager credits the ‘black and white’ viewpoint characteristic of autism with helping her confront the stark reality of climate change. ‘Either we limit the warming to 1.5°C over pre-industrial levels, or we don’t,’ she wrote. ‘There are no grey areas when it comes to survival.’”

The fact that Thunberg is on the autistic spectrum explains how she has become so fixated on the issue of our planet’s survival. What is not explained is why it takes a child, whose brain is slightly differently wired, to bring the future of mankind to the world’s attention. It is a heavy burden for one so young.

Attacking the messenger
Politics is brutal. If you seek power then you know you will need to don your flak jacket and face up to the incoming missiles of barbs and character assassinations. The poison comes from all angles – the know-it-all pundits who dish out the shit but never put themselves forward to lead, the anonymous social media trolls and the power-crazed narcissists who will lash out to divert from their own shortcomings (ie Trump and Putin).

It shouldn’t be this way, but at least aspiring leaders are aware what they may be letting themselves in for. How could a nine-year-old fixated with worries over climate change anticipate that her fears would make her a target of hate or ridicule?

Brendan O’Neill, a regular writer for The Spectator, described Greta’s UN speech as chilling,  picking on her “monotone voice” and “look of apocalyptic dread in her eyes”.

The Australian News Corp (part of the Murdoch empire) columnist Andrew Bolt used her autism as a weapon to dismiss her as “deeply disturbed”, writing, “I have never seen a girl so young and with so many mental disorders treated by so many adults as a guru. Far more interesting is why so many adults – including elected politicians, top business leaders, the Pope and journalists – treat a young and strange girl with such awe and even rapture. Her intense fear of the climate is not surprising from someone with disorders which intensify fears.”

Greta replied succinctly on social media: “I am indeed ‘deeply disturbed’ about the fact that these hate and conspiracy campaigns are allowed to go on and on and on just because we children communicate and act on the science. Where are the adults?”

When Greta set sail for New York for the UN summit (in doing so making a point about flying), UKIP’s funder, Arron Banks, pointed out that “Freak yachting accidents do happen in August …”

Jeremy Corbyn’s brother Piers tweeted that, “Listening to an ignorant brainwashed child is deranged,” - a tweet celebrated joyously by The Sun’s Rod Liddle.

And there was a chorus of outrage when Nick Robinson didn’t press Greta hard enough on Radio 4’s Today programme, with calls for her to be grilled by the Beeb’s most ferocious rottweiler Andrew Neil. The hope was that a proper kicking on live TV would put her in her place and prompt an emotional meltdown.

This, of course, assumes that Neil would outwit her in a debate. Her critics may well be seriously underestimating her.

The way she handles patronising comments from two of the world’s most powerful men, Trump and Putin, is priceless – and demonstrates a wicked sense of humour that many might assume is at odds with her Aspergers.

After Greta’s impassioned UN speech, Trump sarcastically tweeted: “She seems like a very happy young girl looking forward to a bright and wonderful future. So nice to see!”

Greta immediately subverted his dig, by changing her Twitter bio to: “A very happy young girl looking forward to a bright and wonderful future.”

She did the same after Putin, in the most patronising way, called her a kind and sincere girl, before dismissing her lack of knowledge. She quickly changed her bio to: “A kind but poorly informed teenager.” Touché!

Misogyny in action
Camilla Nelson, Associate Professor in Media at University of Notre Dame (writing for theconversation.com) believes misogyny and a lack of respect of the views of the young lie at the heart of Greta’s treatment: “Greta Thunberg obviously scares some men silly. The bullying of the teenager by conservative middle-aged men has taken on a grim, almost hysterical edge. And some of them are reaching deep into the misogynist’s playbook to divert focus from her message.

“It is not a rhetorical accident that critics of Thunberg, nearly 17, almost always call her a ‘child’. This infantilisation is invariably accompanied by accusations of emotionality, hysteria, mental disturbance, and an inability to think for herself – stereotypically feminine labels which are traditionally used to silence women’s public speech, and undermine their authority.

“At a deep level, the language of climate denialism is tied up with a form of masculine identity predicated on modern industrial capitalism – specifically, the Promethean idea of the conquest of nature by man, in a world especially made for men.

“By attacking industrial capitalism, and its ethos of politics as usual, Thunberg is not only attacking the core beliefs and world view of certain sorts of men, but also their sense of masculine self-worth. Male rage is their knee-jerk response.”

An uncomfortable truth
There can be no doubt that the actions of humans have damaged our planet and future generations will pay the price. Governments set targets to reduce emissions but with deadlines so far in the future, the problem is kicked into the long grass and they carry on regardless. Greta Thunberg is the most effective critic of this complacency.

I am part of the generation that is the problem and I admit Greta makes me feel uncomfortable. I drive to work (in a petrol car), I enjoy eating a juicy steak and given half the chance, I’d jet off tomorrow to a sunny beach to escape the incessant rain. Saving the planet is not my priority and she is right to criticise people like me. Her ability to expose uncomfortable truths has to be applauded and I know I need to do more.

Young people need more of a voice and it’s about time that the arrogant bullies in the media and in politics were challenged. It shouldn’t be the case, but the world needs Greta Thunberg. She has lost her childhood and paid a huge personal price. The planet owes her a big thank you.

65 How your business could benefit from SIEM

Security information and event management (SIEM) technology has been around for well over a decade, and to many businesses it remains...