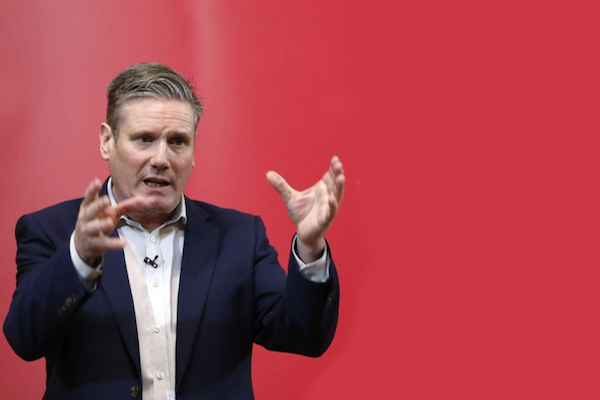 As a keen footballer, Keir Starmer would have relished the gaping open goal.

For the Leader of the Opposition, it was impossible to miss the target.

But as the storm raged on, Starmer called a halt on the proceedings: "We cannot lose another week to this farce. We need to get back on track.”

Clearly, he had calculated that he had said enough on the subject, and a continuous barrage of Cummings' related abuse would be counter-productive.

It was all about the long game. Arsenal-supporting Starmer decided he should be less like the club legend Thierry Henry, and more like fellow Arsenal fan, Mo Farah.

We are living in strange times. Boris Johnson could not have imagined a tougher introduction to life as PM. Until now, he had got by simply ruffling his hair and parroting infinite repetitions of "Get Brexit Done".

It has been equally surrreal for the new Leader of the Opposition. After relishing the opportunity to use his forensic barristerial experience to take down the PM, he has had to temper any full-blooded attacks to avoid any accusation of acting against the national interest.

He has had to choose his moments carefully. But this doesn't mean the government is getting an easy ride.

New Statesman writer Martin Fletcher asserts that, "[Starmer] cloaks his attacks in the rhetoric of constructive criticism. He knows there is little public appetite for point-scoring in the midst of this emergency."

A couple of weeks before the Cummings story broke, Johnson faced his first wobble. His use of simple slogans had been staggeringly successful. To the point, no messing, you knew what the message was: "Get Brexit Done." "Stay at Home. Save Lives. Protect the NHS."

And then he delivered a dud: "Stay Alert." Without the clarity of the message, Johnson blustered incoherently to a huge TV audience.

With his authority diminished, Johnson prepared for PM's Questions on May 13th, awaiting the inevitable ridicule from the opposition benches.

Starmer had other ideas. Instead he quoted the hospital doctor who said that that government policy had “seeded” the epidemic in care homes by transferring Covid-19 patients from hospitals.

He also accused the government of inaction on care homes, quoting a government web page, live until March 13th, which stated it was “very unlikely that anyone receiving care in a care home or the community will become infected”.

Looking rattled and without an answer, Johnson just mumbled that Cov- id-19 was “an appalling disease which afflicts some groups far more than others.”

PM's Questions had always been so easy. Jermy Corbyn would stand up to comdemn the government's record on inequality / low pay / poverty / housing quality /environment, and Johnson would reply with an insult (eg "I can only see one chlorinated chicken and he's on that bench" or calling Corbyn "a great big girl's blouse'"). Cue riotous laughing and pointing from Tory benches.

Starmer won't be such a pushover. Does it matter? Martin Fletcher believes it does: "Good performances at the despatch box help leaders rally the troops. They galvanise their backbenchers and inspire party workers. Word filters down to the grass roots like moisture through parched soil."

Starmer will certainly ensure the government takes the Parliamentary debates more seriously, which will be tough for a Prime Minister who has spent most of his political career avoiding being held to account.

Starmer will have noted Johnson's fear of an Andrew Neil interview during the election and his habit of missing chamber debates during his tenure as London Mayor.

The question is, can he hide for another four years?

The problem with Labour
Starmer could beat Johnson hands- down in every Parliamentary debate for the next four and half years, but that doesn't mean he will achieve his ambition of becoming Prime Minister.

The electorate comprehensively rejected Labour in the December election. Many voters baulked at the idea of Jeremy Corbyn as Prime Minister. Many treated the election as a further referendum on Brexit, and supported Johnson's promise to finally get the thing done.

Brexit and Corbyn won't be factors in the 2024 election, but it will be a huge battle to lure back the lost voters, even in previous Labour strongholds.

The post mortem into Labour's failure raised several deep-seated issues. The party had failed on anti-semitism, membership was dominated by Momentum supporters who were at odds with many MPs, working class voters in many Midlands and Northern seats felt unrepresented, and the vote in Scotland had been eliminated by the SNP.

Labour has always been a broad church, but rarely had the divisons been so deep. The Parliamentary Party tried to oust Corbyn as leader in 2016, but the membership had other ideas. The Labour Party reported 292,505 full members in 2015. Two years later, it had risen to 552,000, making it the largest political party in Western Europe, mostly attracted by Corbyn's socialist vision.

The division was also geographic. Gisela Stuart, Labour MP for Birming- ham Edgbaston from 1997 to 2017, incurred the wrath of many Labour supporters when she seemed happier sharing a podium with Boris Johnson than her own MPs during the Brexit referendum. But her criticism of Labour was shared by many traditional voters.

After the 2019 election defeat, she told The Guardian: "Labour has a Lon- don problem. Its leading remainers and leftwing ideologues both see the world through the eyes of a north Lon- don elite, and that distorts their view of the wider country. They gazed with disdain at working-class communities when these voters were Labour’s people and deserved respect."

Tackling Anti-Semitism
Starmer's first priority was to tackle the terrible accusation of anti-semitism. For the vast majority of Labour members, who are rightly proud of the party's heritage of fighting discrimination, this was a painful reputation.

The spectacle of Liverpool Wavertree MP Luciana Berger being driven from the party, was perhaps the lowest point of the party's modern history.

On his appointment as leader, Starmer immediately told Jewish leaders: “We have to face the future with honesty. On behalf of the Labour Party, I am sorry... I have seen the grief that [anti-Semitism] brought to so many Jewish communities.

“I will tear out this poison by its roots and judge success by the return of Jewish members and those who felt that they could no longer support us.”

It is a serious pledge, and he has been actively engaging with the Jewish Press, who were so critical of Corbyn.

In an interview with Jewish News, he said, “My wife’s family is Jewish. Her dad is Jewish, their family came over from Poland. The extended family live in Israel.”

He went further and told the Jewish Chronicle: “If the definition of ‘Zionist’ is someone who believes in the state of Israel, in that sense I’m a Zionist.”

The Times of Israel notes that he is also a member of Labour Friends of Palestine & the Middle East, a Parliamentary group that promotes support for the Palestinians and campaigns for “peace and justice in the Middle East through the implementation of international law and respect for human rights.”

The anti-semitic issue was ultimately an example of the party's incompetence. Starmer has showed how easy it is to respect the right of Israel to exist, yet campaign for the rights of Palestinians. All Labour had to do was throw out vocal activists who refused to accept the state of Israel. Corbyn, a man incapable of racism, failed in this simple task.

The next PM?
The Labour Party can often resemble the classic 'Judean People's Front' scene from Monty Python's Life of Brian:

"Surely we must be united against the common enemy?"
"Tony Blair!"
"No, no. The Tories!"

The uncomfortable truth for the left of the party is that Tony Blair is the only Labour leader to have won an election since 1974. That's 46 years!

The heroes of the left may have been ideologically pure, but they have achieved exactly nothing for the low- paid, the poor or the homeless as they have never won an election.

The Labour left raged against Tory austerity, forgetting the fact that the programmes being cut were those created by Blair's government.

But it appears there may have been a shift in the party. A good sign is that Starmer was elected in a leadership election remarkably free of vitriol and barbs. Aside from the far left, there seems to be a collective realisation that now is the time to choose a leader who actually may get elected.

The Economist noted that he has already "purged Mr Corbyn’s allies from the shadow cabinet and drafted in sensible, more moderate types.

"Lisa Nandy, one of Sir Keir’s leadership rivals, is the new shadow foreign secretary; unlike Mr Corbyn, she is a strong critic of Vladimir Putin. Angela Rayner, who left school without qualifications, is the new deputy leader; she is on the left but never fit in with Mr Corbyn’s gang. Rebecca Long-Bailey, Mr Corbyn’s favoured candidate, is shadow education secretary."

Aside from Long-Bailey, this is a sugnificant shift away from Corbyn.

In May, David Evans was appointed as Labour’s new general secretary, which was seen as a huge win for Keir Starmer. Evans is a veteran of the Blair years.

On www.labourlist.org, Toby Breslin saw this as a significant appointment, writing, "The underlying philosophy of the Corbyn years – that the material interests of the 99% and the 1% are fundamentally and irreconcilably opposed – has been all but scrapped.

"In that respect, Starmer could be Labour’s next moderniser. With four years to go, it’s too early to say what Labour will look like by the next election. But right now, one thing is clear: class politics are out."

It seems that the revolutionarty left has given up on Labour. Writers such as Max Stein on www.rs21.org urges an exodus of the left that: "will allow blocks of members to maintain some cohesion and organisation outside the party." No doubt Starmer will hope this is goodbye rather than au revoir.

The right wing press is hoping that class politics will stay a bit longer, anxious to portray Starmer as part of the despised London elite.

"He has always been keen to play down his privilege and play up his working-class roots. But Sir Keir Starmer owns seven acres of land that could be worth up to £10 million, " wrote The Mail on Sunday.

"Could be" is rather important. It could be if it was developed but inconveniently for the paper's story, the plot is on undevelopable green belt land. But anything that gives an impression of elitism will help! Even if Starmer is actually the son of a toolmaker and a nurse.

Starmer will face much worse as the election nears, especially if he looks like he might win. Expect all the decisons he made when he was the Director of Public Prosecutions to be dissected in case they can be used against him.

He has a genuine chance if he can keep his nerve, stay calm and use all his experience from his distinguished legal career.

It's a marathon not a sprint, as his fellow Gooner Farah will testify.