From field to firkin in a furlong

READ NEXT
The end of the big freeze 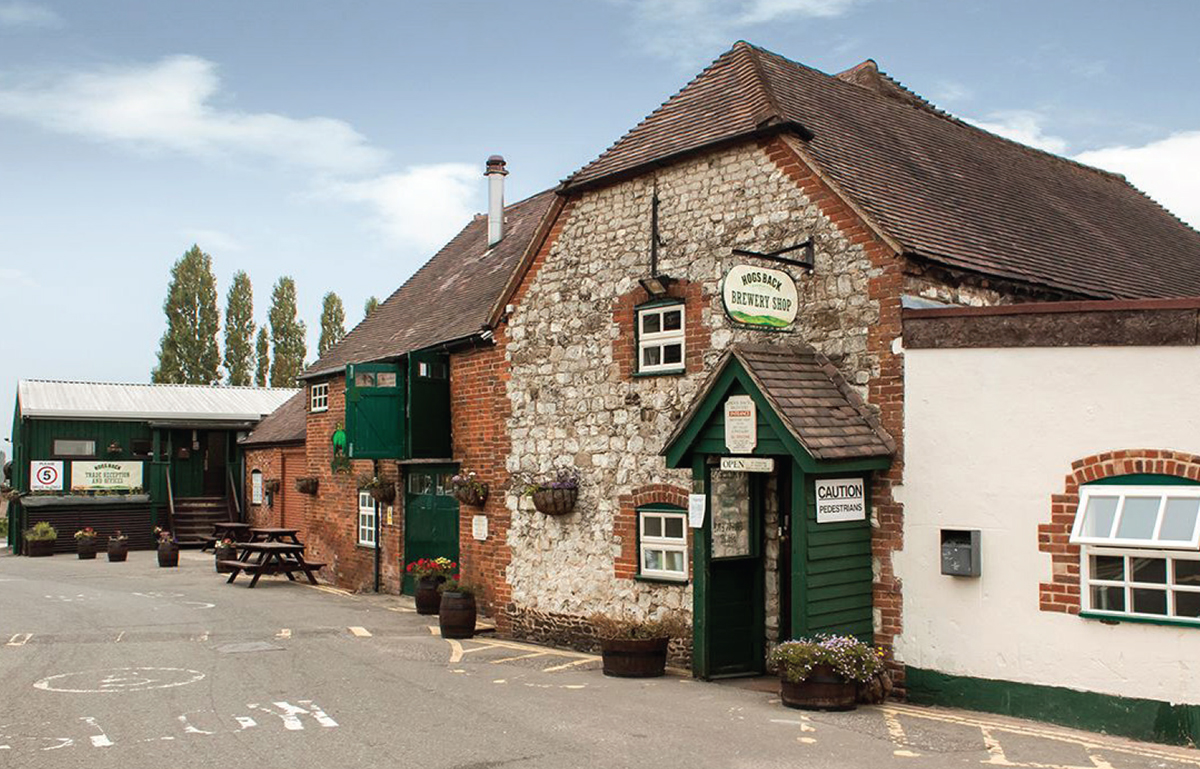 Hogs Back Brewery, located in the village of Tongham, near Farnham in Surrey is a familiar and much-loved name across the south-east. Its beers, including its flagship TEA or Traditional English Ale, are sold in pubs, bars, supermarkets and bottle shops across the region, with their distinctive hog-themed branding making them instantly recognisable.

TEA was the first beer brewed by Hogs Back when it opened in 1992 on Manor Farm, where it is still based today. The full-bodied, well-balanced bitter has been a cornerstone of the brewery’s success, thanks to a raft of awards including runner up in the coveted Champion Beer of Britain back in 2000. Subsequent launches including Hop Garden Gold, RIP Snorter and A over T (Aromas over Tongham) bolstered Hogs Back’s reputation as a brewer of exceptionally fine cask ales. In more recent years, the brewery has broadened its portfolio, introducing Hogstar lager, Surrey Nirvana Session IPA and Little Swine low alcohol beer.

This combination of innovation with brewing tradition has become Hogs Back’s hallmark and underpinned its decision, in 2014, to plant a hop garden adjacent to the brewery and restore the near-extinct local hop variety, Farnham White Bine. In 2019, they moved the
hop garden closer to the brewery into a much larger field, where 6,000 hop vines now grow. And in 2020, despite Covid and lockdown, Hogs Back invested in a tractor and equipment to carry out their own harvesting rather than sub-contract it.

It’s all part of their ambition to reduce their carbon footprint; the hops travel just yards from growing in the field to the brewhouse where they are added to the beers - ‘from field to firkin in a furlong’.  And it’s an approach that has caught the attention of the national media with the brewery featured on the BBC’s Countryfile, Saturday Kitchen, On Your Farm and Channel 5’s Harvest on the Farm

Hogs Back enjoys a close relationship with the local community in and around Farnham. Its annual Hop Harvest Party, offering live music, street food, children’s entertainment as well as beer, is attended by thousands of local residents every September (apart from 2020, due to Covid), and it has a thriving ‘Tongham TEA Club’ whose members enjoy exclusive beer tastings among other benefits. Last summer, Hogs Back built a new Brewery Tap bar, converted from an old hop kiln, with outdoor tables overlooking the hop garden and indoor space that was used, when permitted, to host music and comedy nights as well as offering a range of beers brewed just yards away.

The past year has been a challenging one for Hogs Back, as for the hospitality industry in general, but they have reacted quickly and creatively throughout the pandemic, adapting their business to comply with trading restrictions and appeal to changing customer behaviour.  On the day after Lockdown 1.0 was announced in March 2020, Hogs Back created a new drive-through at the brewery, with beers available for collection in a completely contactless transaction. At the same time, the brewer invested in its Home Delivery service, delivering draught and bottled beers direct to customers’ homes, including refillable glass flagons – called Snorters and Snifters – of ‘brewery-fresh’ beers. While pubs were closed, this was the closest beer lovers could enjoy to a ‘pub pint’ and its popularity led to rapid expansion of the service, which now delivers to many thousands of homes across Surrey and into parts of Hampshire, Berkshire and Sussex.

Hogs Back also made use of technology to keep its customers engaged during lockdowns. With its popular Brewery Tours and Tastings on hold for much of the year, they developed a virtual version on Zoom. Participants receive a box of beers, a set of beer ingredients, glass and snacks ahead of joining the Zoom event, which take place at least once a week, led by a Hogs Back expert at the brewery.

Rupert Thompson, Hogs Back Brewery owner, said: “The pandemic has impacted our business, along with so many others in the hospitality industry. However, we were delighted with support from our customers, who have bought beers through our Drive Through and Home Delivery services, and we will continue to offer these services. We think some people will remain cautious about pub visits beyond the official reopening date, and others have got into the habit of having Hogs Back beers in the home, even if they’re also going to be visiting the pub.

“Like every business and indeed every person in the UK, we’re hoping that restrictions on trading will be lifted for good this time. We’re looking forward to selling our beers through pubs again, so that customers can enjoy a sociable pint of TEA with friends – something that so many have missed during lockdown. We’re also making plans to reopen our Brewery Tap as soon as we can, with a programme of live music and entertainment, and restarting our tours of the brewery and hop garden. And we will once again be welcoming thousands of people to our Hop Harvest Party in September.

He added: “It’s still too early to say what the long-term impact of Covid-19 will be, though one ‘silver lining’ for a local business like ours is that there seems to be a renewed enthusiasm for local food and drink, with many people who bought locally during lockdown saying they’ll continue to do so. We’ll certainly raise a glass to that!”

On the support received from NatWest, Thompson said: “We have been a long standing client of NatWest and they helped us buy the farm buildings we occupy with a £1.25m loan, which has allowed us to improve the strength of our balance sheet during these challenging times by allowing us to convert rental outgoings into lower loan repayments, and giving us an important capital asset in due course.

“This also gives us security to invest further in the site including the further development of our own Brewery Tap and visitors centre and our hop kiln. We also now have space for an extra 100 cars to park for special events, a growing part of our business. We found Mike Shepston and his team at NatWest very efficient and easy to deal with – with all the business challenges we faced as a result of Covid, this approach was very welcome!”